A place for pics and tutorials on making Soft Kit (clothing and accessories like buckles and cloak pins).

So I know generally with our waist belts we use the old "through the buckle, then knot" solution, which I love.

The problem I'm running into is with really broad straps - like say, you might have on a pack or bedroll - that gets overly cumbersome.
So assuming you do want to use a wide strap, and you do want to buckle it (say.... because wriggling into a pack with a quiver on your back is a pain) - what do?

In later periods, we see wide straps handled with a double-frame buckle and a leather keeper, like so:

... which of course works quite well, but at least to my eye looks quite late period.

... and also big iron hooks like these, though with some argument as to their historicity.

All however seem to require belt keepers of some kind to keep the tail from flopping about.,,, which for whatever reason looks rather modern to me.

So I have two questions:
Has anyone seen documentation of belt keepers / strap keepers in a Roman through Migration era context?

Failing that, has anyone seen a good solution from that early period for connecting wide straps that'll be carrying some weight?
This historical answer might well be "they didn't use such wide straps in the first place" - and while that's great for swords and quivers and such, once you get to packs a bit of extra width is a godsend.

if there's a reference anyone's come across, I'd love to see it!
Persona: Aerlinneth, Dúnedain of Amon Lendel c. TA 3010.
Top

All however seem to require belt keepers of some kind to keep the tail from flopping about.,,, which for whatever reason looks rather modern to me.

With the big mountain man style I wouldn't see the belt being much longer than needed. Or this is how i have seen them at rendezvous fairs, and then the second part of the buckle is the keeper. This seems plausible in the time frame looking at with extant examples from this article- https://finds.org.uk/counties/findsreco ... s/buckles/ on there they show a buckle of this style big enough for a 46.2mm (1.82 inches) strap. Although the frame is a lot finer in detail.

on the Viking belt hook, i think it would act like a western belt buckle and be fine with out a keeper if it the tail end was short. I use a western belt like this to carry treats, tools and my knife when working my horse in the wood lot, and it never comes off or gets in the way.

I can't find any evidence that this style actually existed but this is the style i was planning on making for my self. 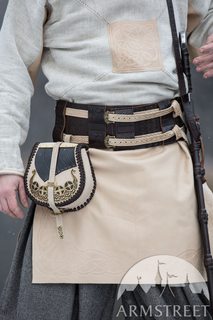 The wide belt would help distribute the weight for the smaller belts bags and equipment, making it more comfortable to wear over long trips with weight on the belt. However it may make it very hot to wear in the summer.

I, too, am interested in seeing what other Rangerfolk are using to solve this same issue, as several of my own belts are of the wider types.

Meganbeyer wrote:...I wouldn't see the belt being much longer than needed. Or this is how i have seen them at rendezvous fairs, and then the second part of the buckle is the keeper.

This is the direction I lean, personally. I don't see traveling accouterments (particularly burden straps) as being made in a one-size-fits-all mode as we generally see them at fires, with a long string of belt holes punched in. I have four holes in my quiver strap, for example, to fit over my torso and one linen shirt all the way up to body linens, wool tunic, wool sucrose, leather jerkin, and cloak. To that end, the strap's end never gets crazy long. When it's at its longest, I have one of your longer shapeways buckles and I just tuck the strap-end through the gap in the buckle.
Now the sword shall come from under the cloak.
Top

Okay seriously though I do have some insights. I'll include pictures in a separate reply so I don't make this one too confusing.

Firstly there is ample evidence in the migration period of wide belts, a huge amount of the buckles simply wouldn't fit on smaller width belts, my largest ones which are based on actual finds are 5cm wide but you can find even larger if you go outside Anglo Saxon finds. The 5th century Kemathen Warrior belt for example is 11.5cm wide and there are Roman ones just as large.

All of my belts have a fixed tongue over which a loop or strap is threaded while the spare of the belt then slips behind. The reasoning behind this method of closure is simple. - when you have a giant golden gem encrusted belt buckle the last thing you want to do is obscure it. It's an annoying method though as it can be tricky slipping the small loop over the tongue and the belt has to be the correct size, it's not as easy as ratcheting it to another hole to tighten.
This makes them rather impractical for the use of tying down gear or even layering up clothing. Definitely a form over function kind of deal.

When we are doing our historical hiking we tend to use simple wooden or bone rings that work really well. There is also the double ring belt/strap find from a grave in Dover Buckland which is handy, we tend to simply wrap the excess strap around the loop a few times.

I am aware of one belt keeper from the period (which isn't to say there aren't more) but it's a very ornate one of gold and garnet from a 6th century find in Aker Norway as seen below. 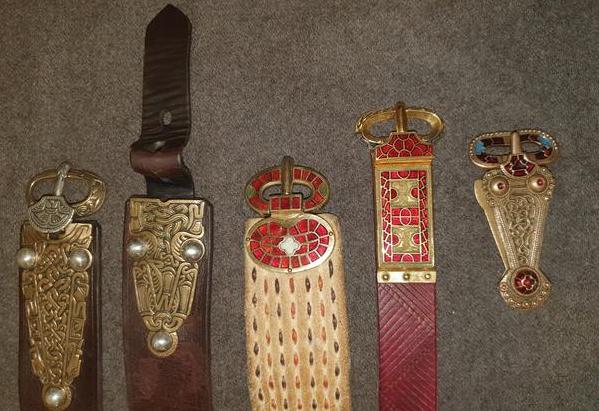 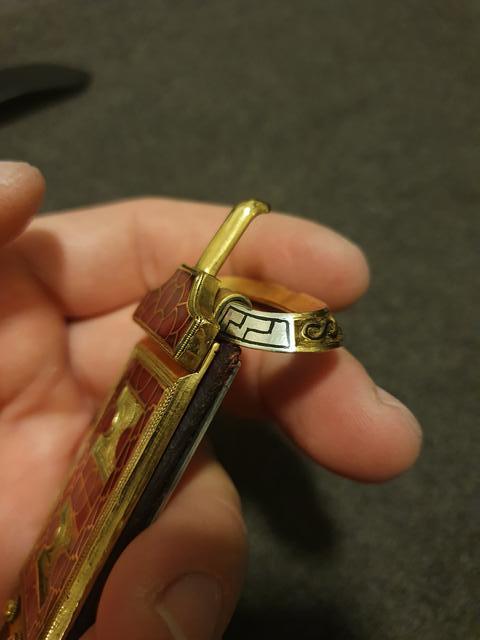 A common method of closure 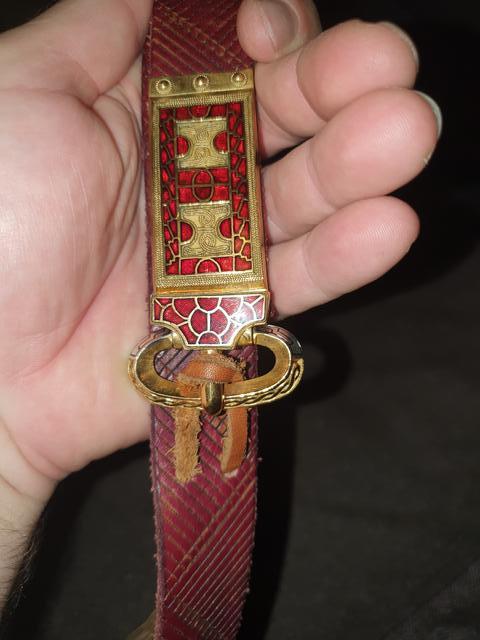 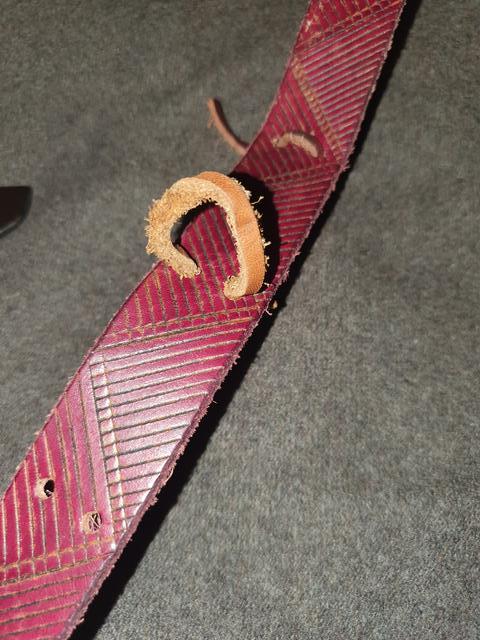 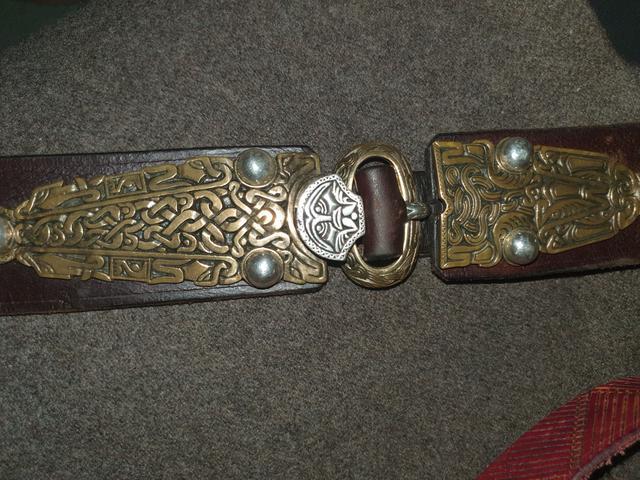 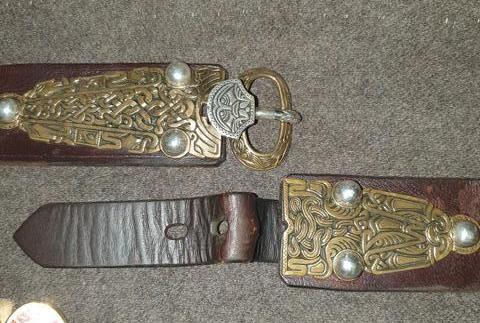 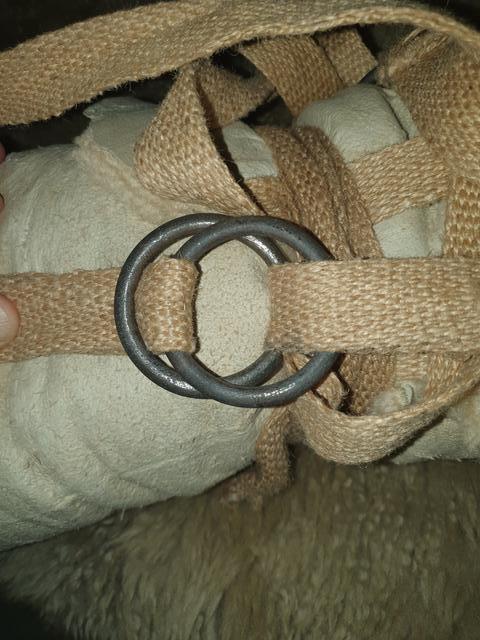 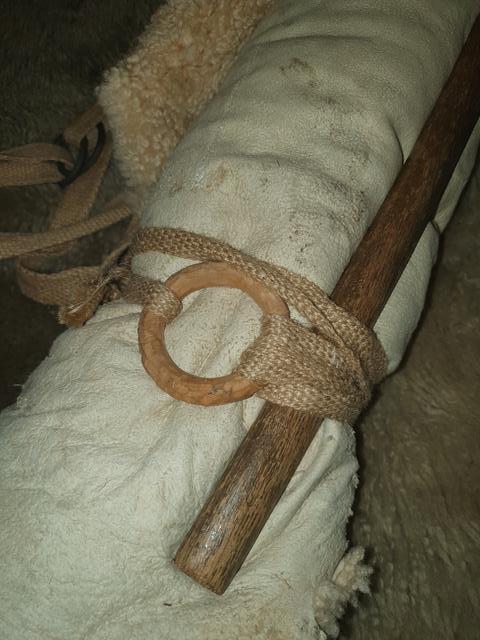 This is very similar to my solution to the problem, when wanting a wide strap but still to be able to tie the tail around the belt I just have a wide fixed length piece on the back and a narrow strap passing through slots or loops in the wider piece, giving you the best of both

along the same idea, have you thought about something similar to what Udwin has used for his frame pack?

the straps could be narrow leather with a thick piece of padding of some kind underneath? just a thought
Gimli: It's true you don't see many Dwarf-women. And in fact, they are so alike in voice and appearance, that they are often mistaken for Dwarf-men.
Aragorn: It's the beards.
Top

Eofur - that Migration stuff is just amazing! While far to rich and heavy for this project, I just adore that Sutton-Hoo-ish buckle. It's gorgeous!

Also very cool seeing a keeper in Roman context: even if I don't use that form, just knowing the concept was bouncing around by then is extremely valuable.
Likewise the use of a smaller buckled belt on a wider strap.

For what it's worth -
I had been containing the free end on my quiver just with the snapsack, like so: 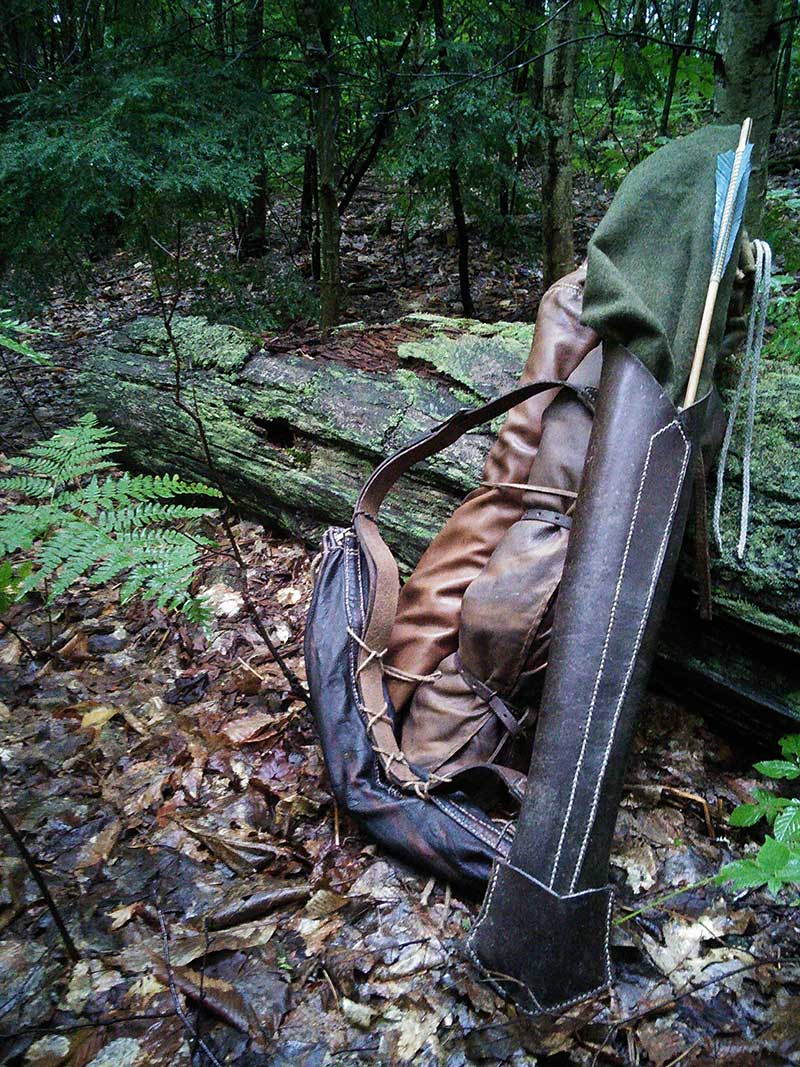 .... but in truth that strap I think really doesn't need a buckle at all. A cord closure probably would be just fine, since I've so far found little need for adustment.

For the snapsack/bedroll though, that "ratcheting" effect is extremely useful. Hrmmmm. Think think think...

Thanks Elleth I hope it helped.
I think my Anglo Saxon gear shows I have a bad case of dwarf sickness!

I know they're not much to look at but those simple wooden rings are the simplest and most versatile tie down tool I've come across yet.
For seven days without eating or sleeping the new king sat, until he stood and cried "This cannot be borne!"!
Top

WOW! All that Anglo-Saxon eye candy is just to die for! Thank you for sharing, Eofor! I‘ve always wondered how those buckles functioned! They always seemed too bulky to fit an actual strap through like we do with modern belts, so that makes way more sense.

And yeah, my own personal inclination (though I admit that it’s not necessarily based on historical sources) is that the most historical means of wrangling the tail end of a belt like that would have been simply not to leave it very long. I do know that people around the 12th and 13th century apparently did not use the “medieval knot” method for their belts, instead simply allowing the tail to dangle downwards of its own accord. While I think this looks a bit stupid, and it feels like it would really get in the way, it definitely showed off the buckles more, which as Eofor says, was a big deal when you had an ornate metal plate, and other buckle decoration. But that’s just belts. I can’t say about other types of straps, but it seems to me that the simplest solution is to use a two-lobed buckle and just keep the strap end nice and short.

That being said, I do use strap-end keepers quite a bit myself, even though like you I find them to feel extremely modern. It’s just such a simple, practical solution though.
Top
Post Reply
10 posts • Page 1 of 1

Users browsing this forum: No registered users and 9 guests