All this time I'd thought the "coffee cup" finger loop on a drinking vessel was a comparatively late thing, and probably a bit out of period.

estimated made ~1250BC, excavated 1856 in East Sussex England.
https://en.wikipedia.org/wiki/Hove_amber_cup


I suppose this another for the "everything is older than we think it is" file.

Awesome. I think there are some Minoan gold cups with finger loops but this is more than impressive. It boggles my mind trying to imagine the hunk of amber that must have started out as!

Ahhh, the more I learn about it, the higher 1400-1250 BCE Eurasiafrica goes on my would-definitely-time-travel-to list. Beautiful pieces like this cup, amazing cultural diffusion between Denmark and Egypt, high times for the Assyrians, Rameses II, plus the whole Trojan war! Something for everybody!
Personae: Aistan son of Ansteig, common Beorning of Wilderland; Tungo Boffin, Eastfarthing Bounder, 3018 TA
Top

Good gracious, that must have been quite a chunk of amber to make that! Very impressive!

Udwin wrote:Ahhh, the more I learn about it, the higher 1400-1250 BCE Eurasiafrica goes on my would-definitely-time-travel-to list. Beautiful pieces like this cup, amazing cultural diffusion between Denmark and Egypt, high times for the Assyrians, Rameses II, plus the whole Trojan war! Something for everybody!

At this point, I have so many places to time-travel to I'd need to be the Doctor's companion to see it all, haha. I'm curious about the connection between Denmark and Egypt as I've never heard of that relationship in that time period. Any good starting places?
Top

Cimrandir wrote:I'm curious about the connection between Denmark and Egypt as I've never heard of that relationship in that time period. Any good starting places?

I've only come across a handful of scholarly articles on the Denmark-Egypt connections, none of which I've been able to read in full. Different articles deal with the evidence separately.
-blue glass beads have been found in two oak coffin burials, which were spectroscopically identified as Egyptian (and/or possibly Mesopotamian). Tut's tomb has Baltic amber ornaments.
-18 decorated folding stools have been found in Nordic Europe and are nearly identical to one found in Tut's tomb. Since they date even earlier in Mesopotamia, it seems like the northerners stole the idea from Egypt (possibly around the time the beads and amber ^ were being exchanged), but I've seen it described as the world's first act of industrial espionage ; )
-murals of Egyptian ceremonial dances show topless women wearing skirts and doing backflips, just like the bronze figures found at Grevensvænge.: 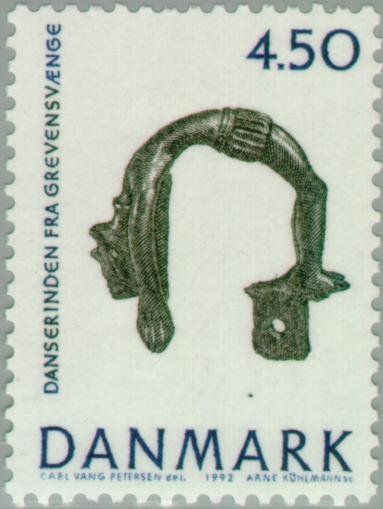 A connection was also drawn to Minoan murals of bullleaping often showing women in the same backflip position (not dressed the same, but roughly contemporaneous).

All in all, a fun rabbit hole to explore and expand our understanding of this fascinating period.
Personae: Aistan son of Ansteig, common Beorning of Wilderland; Tungo Boffin, Eastfarthing Bounder, 3018 TA
Top

Amber - goodness yes! And I've been happy with a string of tiny amber beads.
Every time I look at the style of that cup though I'm still agog - if it weren't for the amber-bugs, I'd swear it was turned out of bakelite in the 1930s. Wild wild wild.

I was looking at some history videos on pre-historical Europe as well... I don't have the expertise to sort out the genetic evidence, but it looks like a few people are saying there was a Celtic-ish settlement wave ~10th c. BC from Britain and the western coast EAST, but most are saying it went the other way?

The bronze age period of northern/western Europe is fascinating, in no little part because so much is still deeply conjectural.
Even just scratching at the surface, I was surprised by how much sophistication was there - I'd been conditioned by fiction I guess to expect the stereotypical "savage hill tribes" archetype, but.. no.
I should have known better, of course. I don't suppose "savage hill tribes" could have fielded the numbers or engineering Caesar ran up against. If they weren't quite a peer of Rome, they were a heck of a lot closer than I'd ever thought before.

Users browsing this forum: No registered users and 11 guests