Goodness.. while bigger than I was thinking, that's still quite small.

I've been wondering about total population, and what that implies for division of labor. I mean, we see in the Shire and Bree both glassware, pottery, metals, coins, fabrics, leathers, paper - while some of those no doubt come from trade, I can't imagine given the rest of the text that - for instance - the windows of Bree are anything but glass, and carting even small panes up the Greenway seems dicey enough, and over the Mistys foolhardy. Maybe from the dwarves?

There's just so much stuff in Bree that - unlike heavy bronze kettles - inevitably gets broken or worn out over a generation or three and needs replacing.
Clearly as a rural idyll of Tolkien's imagination it's not an Edwardian mill town, but I can't help but think there has to be some local industry somewhere. Which in turn raises the question - how many people actually live in the Breeland?
Persona: Aerlinneth, Dúnedain of Amon Lendel c. TA 3010.
Top

This is quite an interesting topic, that is worth necroposting in my mind.
Tolkien tells us that "The village of Bree had some hundred stone houses of the Big Folk" which puts us at a minimum of ~100 villages in Bree, if all the houses where inhabited by single residents. That's a bit unlikely, so lets say about 300?

It seems real low nowadays, but if we say that Bree chiefly was inhabited by skilled labour, or craftsmen it makes more sense.
Bree would serve as a hub for all the breelands, supplying the rural population with dwarven and Hobbit goods, while selling and buying food that is grown by the farmers of the region. Bree would likely remain quite sleepy most of the year, only to fill up when markets were held. Dwarves, Breelanders, Ruffians and Rangers would flock to the village to supply themselves with Shire-woven fabrics, Breeland Butter, Dwarven Silverware (Like the set seen in "There is an in, A merry old in") and furs hunted by the various hunters that roamed Eriador.

https://middle-earth.xenite.org/is-ther ... saken-inn/ quite an interesting article about the forsaken inn that aragorn mention in FOTR.


And on the topic of how they might look, i would consider looking at the proffessors own paintings of hobbiton. There are clear depictions of Hobbit non-smials houses. There are likely quite similar in structure to the Bree ones, with those in bree having multiple storeys and no whitewashing.
Artist, larper and history lover.
Top

I''d suggest the estimate of 300 villagers to be way on the low side. With children and elders in the mix, we're probably talking closer to 600. Couple that with the surrounding farmers, helpers and their families plus wood cutters for the town we're talking a bustling community. 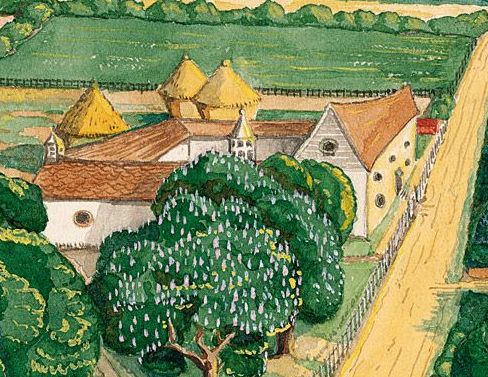 Id imagine the houses of Bree look something like this, although not whitewashed.

I do not think Wattle and Daub was as widely used in ME as it was in the real world, Bree especially seem to have great supplies of wood.

Maybe something like this? This is of course the Pranching pony, looking a bit like an old fornor manor? 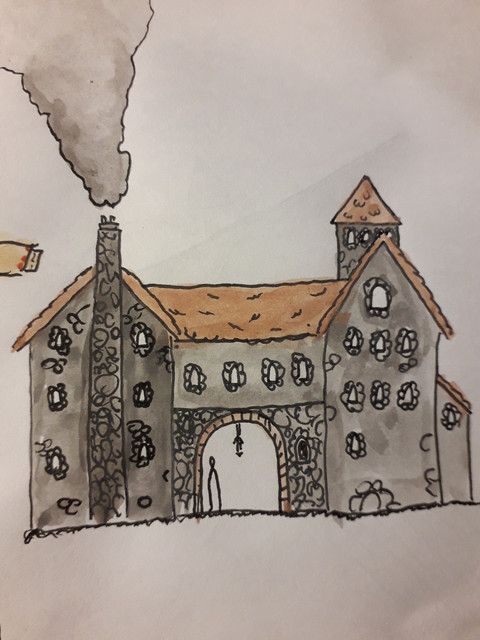 Peter Remling wrote:I''d suggest the estimate of 300 villagers to be way on the low side. With children and elders in the mix, we're probably talking closer to 600. Couple that with the surrounding farmers, helpers and their families plus wood cutters for the town we're talking a bustling community.

There are also the Bree-land Hobbits, who "lived mostly in Staddle though there were some in Bree itself, especially on the higher slopes of the hill, above the houses of the Men" (FotR, Book I, Chapter 9: At the Sign of the Prancing Pony). So, "some hundred stone houses of the Big Folk" and "some" Hobbit holes in Bree.

Darnokthemage wrote:Bree would likely remain quite sleepy most of the year, only to fill up when markets were held.

The Prancing Pony is described as "a meeting place for the idle, talkative, and inquisitive among the inhabitants, large and small, of the four villages; and a resort of Rangers and other wanderers, and for such travelers (mostly dwarves) as still journeyed on the East Road, to and from the Mountains" (FotR, Book I, Chapter 9: At the Sign of the Prancing Pony), so it seems like folk from the Bree-lands congregate in Bree, and that travelers still pass through. Less than used to, as the inn "had been built long ago when the traffic on the roads had been far greater", but when we see the Pony for the first time, it's housing "a party that came up the Greenway from down South", "a travelling company of dwarves going West", a Ranger, and four hobbits from the Shire. That is a notably busy night, though. So, I don't know if I'd describe Bree as sleepy as so much as... old, and keeping to itself in most matters.

Darnokthemage wrote:I do not think Wattle and Daub was as widely used in ME as it was in the real world, Bree especially seem to have great supplies of wood.

I agree - probably not wattle and daub, since the houses are described as stone, specifically.
- Ned Houndswood, Breelander
Richmond Fantasy-Inspired Hiking and Camping (on WordPress and Facebook)
Top

You are right, sleepy is the wrong word to describe it.
Artist, larper and history lover.
Top

I love the drawing!

... and I don't think I'd never noticed the round windows on the Professor's drawing of the building in the Shire. I recall that detail from the text - but now cool to see it on paper!

Thank you, i looked at some medieval scottish stone houses as an inspiration, and the Hobbit manors in tolkiens painting. Since the Inn is so old i imagined it would have served as a manor in the old arnorian days, whitewashed and with an luxurious interior, the large arch would likely have served as a gate, with the doors beig removed in later days. The roof is tiles, just like the ones in the pic, maybe made by dwarves, or even bought by lotters of old Arnorean ruins? Or they are made in te shire, who knows. It would probably have been whitewashed back in the day, but time has vanished the memory of that. The small tower is inspired by the ones on the hobbit manor, maybe to keep birds or for lookout?
Artist, larper and history lover.
Top It also appears we have a map pf Vree from the Old man himself.
Artist, larper and history lover.
Top
Post Reply
24 posts

Users browsing this forum: No registered users and 11 guests