From Numenor to Far Harad...

I wasn’t totally sure where to put this, since I’m not SPECIFICALLY speaking of HUMAN cultural traditions, but rather speculating about general traditions throughout Middle-earth, but this seemed like as good a place as any.

In any case, I’ve been thinking a lot about Christmas/Yule/general mid-winter holidays this year, and how we all have our own kinds of traditions for celebrating the solstice, and it got me wondering about the potential practice in Middle-earth (and also about how we Rangers and other MERF folks like to celebrate).

So I’m curious about a few things. Firstly, do you think a solstice festival was celebrated across various different Middle-earth cultures? And if so, what would those various solstice traditions have potentially looked like? Certainly not Christmas trees, and lights, and Santa Claus, and so forth... but maybe something that looked a bit more like old Scandinavian Yuletide traditions? Or perhaps rural English folk traditions? Would the Elves have celebrated the return of the sun in some way? What might that have looked like? How about the Dwarves? Are we to assume Hobbits have a very peculiar set of traditions all to themselves, or might they have been somewhat shared across Eriador by various peoples?

And for that matter, what are some of the traditions you yourselves like to celebrate? Obviously there are religious traditions that are common (or at least similar) across various Christian faiths, but I have in mind more secular folk traditions - things that perhaps grew out of old pagan ideas and were then incorporated into more modern celebrations by common people, rather than through the church.

Appendix D - Shire Calendar places importance on Yule and Midyears day (called the Overlithe in a leap year) so Hobbits at the least must have placed some importance on the solstice.

The Lithedays and the Yuledays were the chief holidays and times of feasting. The additional Litheday was added after Midyears day and so the 184th day of the the leap years was called Overlithe and was a day of special merrymaking.

The Overlithe was a day of special holiday, but did not occur in any of the years important to the history of the Great Ring. It occurred in 1420 the year of the famous harvest and wonderful summer, and the merrymaking in that year is said to have been the greatest in record or memory

February is Solmōnaþ (Cake Month) Solmath in the Shire Calendar

June and July are Ærraliða and Æfteraliða (Liða is pronounced similarly to Lithe and means Mild so these translate to before mild and after mild presumably due to the pleasant time of the year) which correspond to Forelithe and Afterlithe. The Anglo Saxons even had a similar tradition to the Shires Overlithe of adding an additional day in a leap year - Thriliða (Third Mild)

August is Weōdmōnaþ (Weed Month) Wedmath in the Shire Calendar

September is Hāliġmōnaþ (Holy Month) Halimath in the Shire Calendar

December is Ærra Gēola (Before Yule) Foreyule in the Shire Calendar

What does this mean? Well if the Shire Calendar follows that of the Anglo Saxons so closely it would stand to reason that similar feast days, traditions and celebrations align.
Things like the Yule log, Yule ham, Yule goat all seem very Hobbit like. I can particularly see the hobbits embracing wassailing (Old English Wæs þu hæl - Be you Hale) which was the precursor to caroling and involved people going door-to-door, singing and offering a drink from the wassail bowl in exchange for gifts. There was an even older custom of visiting orchards in cider producing regions of England, and singing to the trees to promote a good harvest for the coming year.
Last edited by Eofor on Tue Dec 22, 2020 8:48 am, edited 1 time in total.
For seven days without eating or sleeping the new king sat, until he stood and cried "This cannot be borne!"!
Top

I think it's also likely that the Rohirrim follow similar traditions given that the Professor based them so solidly on the Anglo Saxons. They may have a different name for the months but they would still have milked the cows three times a day in Three milk, burnt off weeds in weed month, slaughtered excess lifestock in blood month and that in turn would have meant their times of feast and famine would have been the same.

One difference between the two is the ruling class but it's likely they celebrated Yule and Midsummers day in similar if more formal fashion. The Anglo Saxons also had a ritual feast known as a Symbel. These were feasts for the king and his retainers, a time to reward service, renew oaths and make ritualized boasts or bēots and the feast to celebrate the building of Meduseld was likely a Symbel.

A rash vow he spoke, as he drained the horn at the feast which Brego made to hallow new-built Meduseld, and he never came to the high seat of which he was the heir

As to my own celebrations, I try and avoid all the Neo-pagan stuff but I do like to try and do something though it's all a bit backwards with the seasons here.

Last year in Scotland we visited Bronze age Cairns whose passages were aligned to allow the sun to shine on the burial chamber for a few days either side of the winter solstice. There's been a human connection to it for so long that it's a good time to stop and take time to think about how utterly insignificant you are.

Heimir and I trading tales at this years Winter Solstice camp. 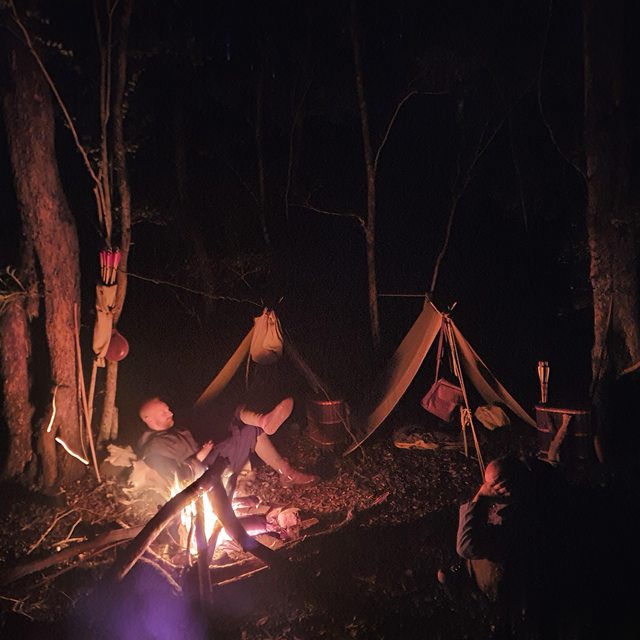 Manveruon wrote:So I’m curious about a few things. Firstly, do you think a solstice festival was celebrated across various different Middle-earth cultures? And if so, what would those various solstice traditions have potentially looked like?...
...How about the Dwarves?

I always imagined (and this isn't grounded in anything besides my imagination - be warned LOL) that Dwarves would probably celebrate the wealth that Mother-Earth could provide, given that mining is so important to there society, and as for what this would look like? There would probably be lots of beer, ale and a feast of some kind, my mind is picturing a hog roast. And as for "when", I'm not sure that the solstice/coming of light would be so important to a race that live and work underground? However as is tradition in most parts of the world, some kind of festival is usually celebrated in the middle of the coldest months of the year, I think that might just be because people want cheering up, by that logic the dwarves could choose the solstice for that festival anyway. Here's my ideas about the winter festivals of the dwarves:

The first date for celebration would be Durin's Day, marked by the moon:

Tolkien wrote:the first day of the last moon of Autumn on the threshold of Winter...When on this day both the Sun and Moon may be seen in the sky together

This year Durin's day fell on the 16th Nov (if my math was right), and marks the dwarven new year, and new year is an obvious excuse for a party

And the second date would be on or close to the solstice. Because the dwarven calendar is lunar it would be most likely marked by the moon and because Durin's day (new year) averages mid-November, and is marked by a new moon, two weeks from then the moon would be full, then in another 4 it would be full again, I make out that 6 weeks to be equal to the average time period between Durin's day and the solstice. And so on the second full moon of the dwarven year it's time to celebrate a kind of Thanksgiving (I'm not sure what it would be called) to give thanks to Mother-Earth for all the gold in the ground

So in searching for a translation of a different phrase, I happened upon this Parf Edhellen page referring to a 1963 letter from the Professor with a Quenya translation of Merry Christmas. I don’t have anything else but I thought it was interesting. Maybe it was on his mind at one point?

In terms of the elves, there is specific reference to 'the festival of Nost-na-Lothion or the Birth of Flowers' in the fall of Gondolin. While of course this is in the first age, it's not hard to imagine this tradition enduring, and perhaps a similar ceremony being practiced by those who have had close contact with the remaining elves of middle earth. With regards to what it entails, the passage describes a 'solemn ceremony' beginning at midnight and continuing until dawn, with not a word being uttered in the city between these hours before hailing the break of day with ancient songs. 'The city is filled with silver lamps, while in the groves upon the new-leaved trees lights of jewelled colours swing, and low musics go along the ways but no voice sings until the dawn.' It doesn't sound all too dissimilar from the Christmas lights of today, presumably with a few less LED's and flashing patterns of course.
While this passage is from one of the earlier versions of the story, the festival in some form or another does seem to endure throughout, later becoming the 'great feast that they named the Gates of Summer' with the people standing 'upon the walls to await the rising sun and sing their songs' in the Silmarillion
Top
Post Reply
6 posts • Page 1 of 1