I've wanted to share this here for a while now, so it's fitting that this be my first real post back on the forums!

Back in January a local friend, fellow artisan, and reenactor bt the name of Casey Thornton taught a short series of classes on making waxed leather water/wine bottles in the traditional hard-sided style that many here I'm sure are familiar with. He sells them through his personal business, Old World Equipment, so he asked that we not use his methods to start manufacturing them, as a professional courtesy, but otherwise offered the classes for free, minus material costs. I've always wanted to try my hand at making one of these, so I jumped at the chance! After finishing mine, I can safely say that he need never worry about me manufacturing them for sale because it was a GIANT pain, haha. In particular, the process of soaking the leather and stuffing it with pearl barley was extremely time consuming, not to mention a complete and utter mess. Furthermore, I found it extremely difficult to maintain a regular shape during the stretching process, and my end result did end up slightly lopsided (although it's hardly noticeable to the casual observer, I think). If I were ever to make more of these, I believe I would try creating a mold from wood (or perhaps 3D printing one), and wet-forming the leather over that, then stitching it all together once it dries. Although this method would probably waste a bit more leather, since the pieces would have to be trimmed after the fact, I feel this would yield more consistent results, and overall just be much, MUCH less labor intensive.

As you can see here, I attempted to include some simple Numenorean-inspired decorative tooling on the front side of the bottle. I designed the embellishment to include a number of elements clearly established in Tolkien's own drawings, and the overall shape was meant to evoke either a floral motif or perhaps a stylized star shape (but hopefully subtle enough not to scream DÚNEDAIN STAR at anyone who might pass by). While perhaps it doesn't EXACTLY follow all the rules of the design language we have established here, I felt it had enough kinship with it to feel fitting and appropriate as a simple adornment to an otherwise very plain and functional item. This was done with the mind of giving it a bit more sense of cultural depth (as Elleth's kit has been such a shining example of lately).

The stopper is a very simple and rustic piece of cherry wood from a tree in Casey's backyard and quickly roughed out on a grinder in his workshop. The very last thing I finished on this project was the shoulder strap, which I made literally the morning of a recent hike and photo shoot, because I realized only then that I had neglected to do so up to that point. I probably would like to eventually swap out both of these items because the stopper is perhaps just a tad TOO rustic for my taste, and the strap is made from some modern, prefinished oil-tan leather I had lying around, which I would very much like to replace for something that fits the otherwise EXTREMELY period-correct construction methods and materials.

Here is the finished product: 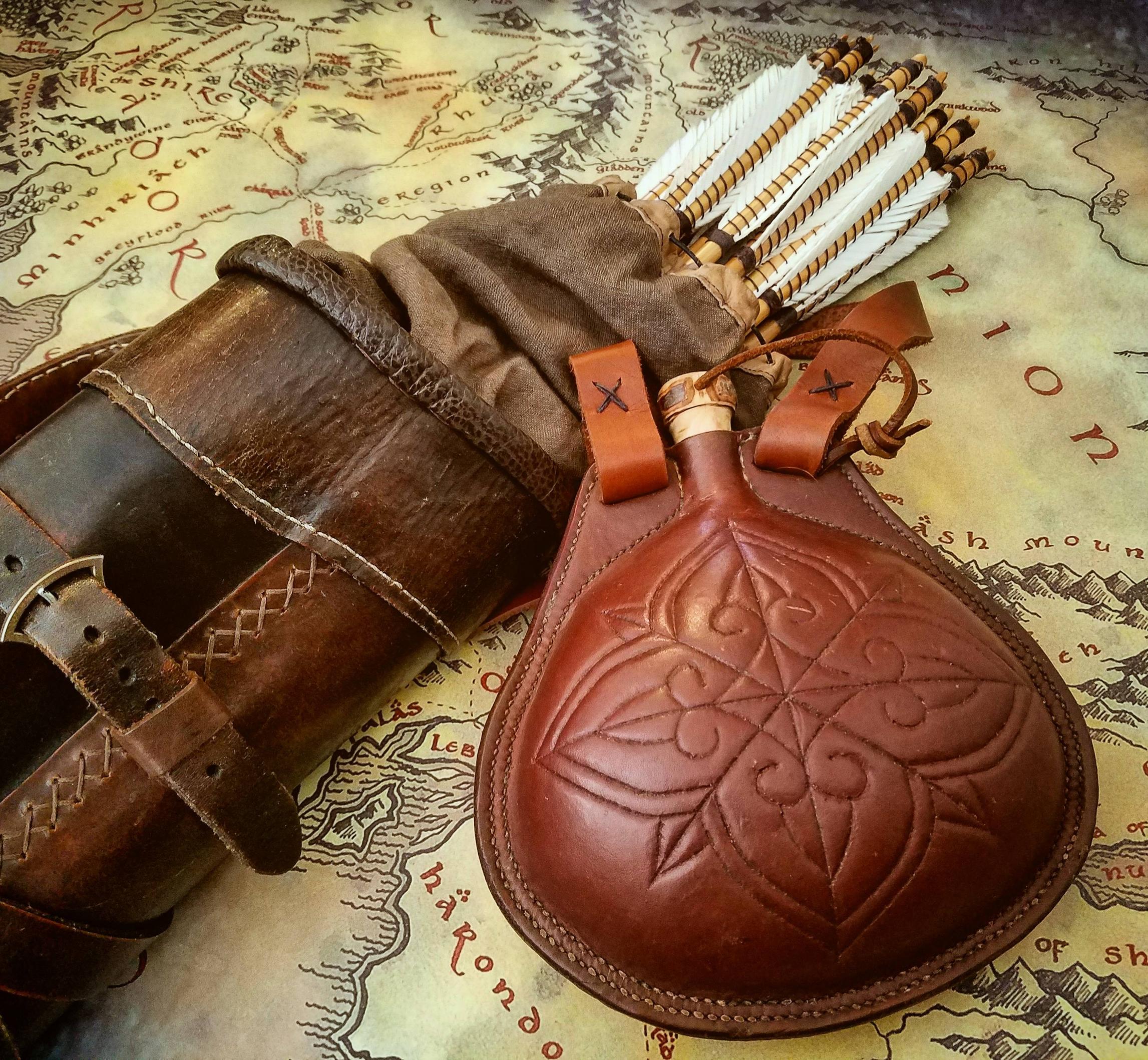 And here are the progress pics: 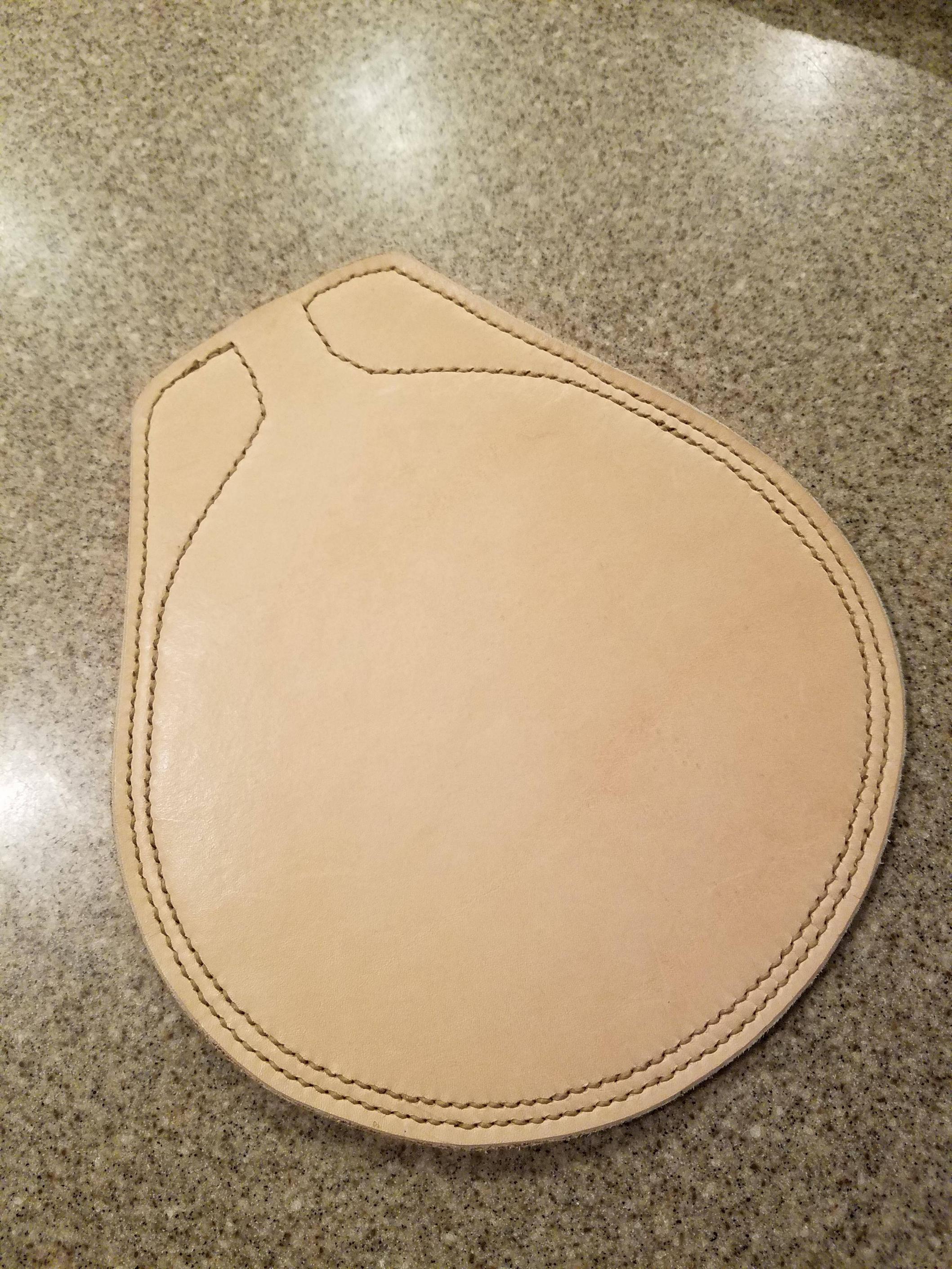 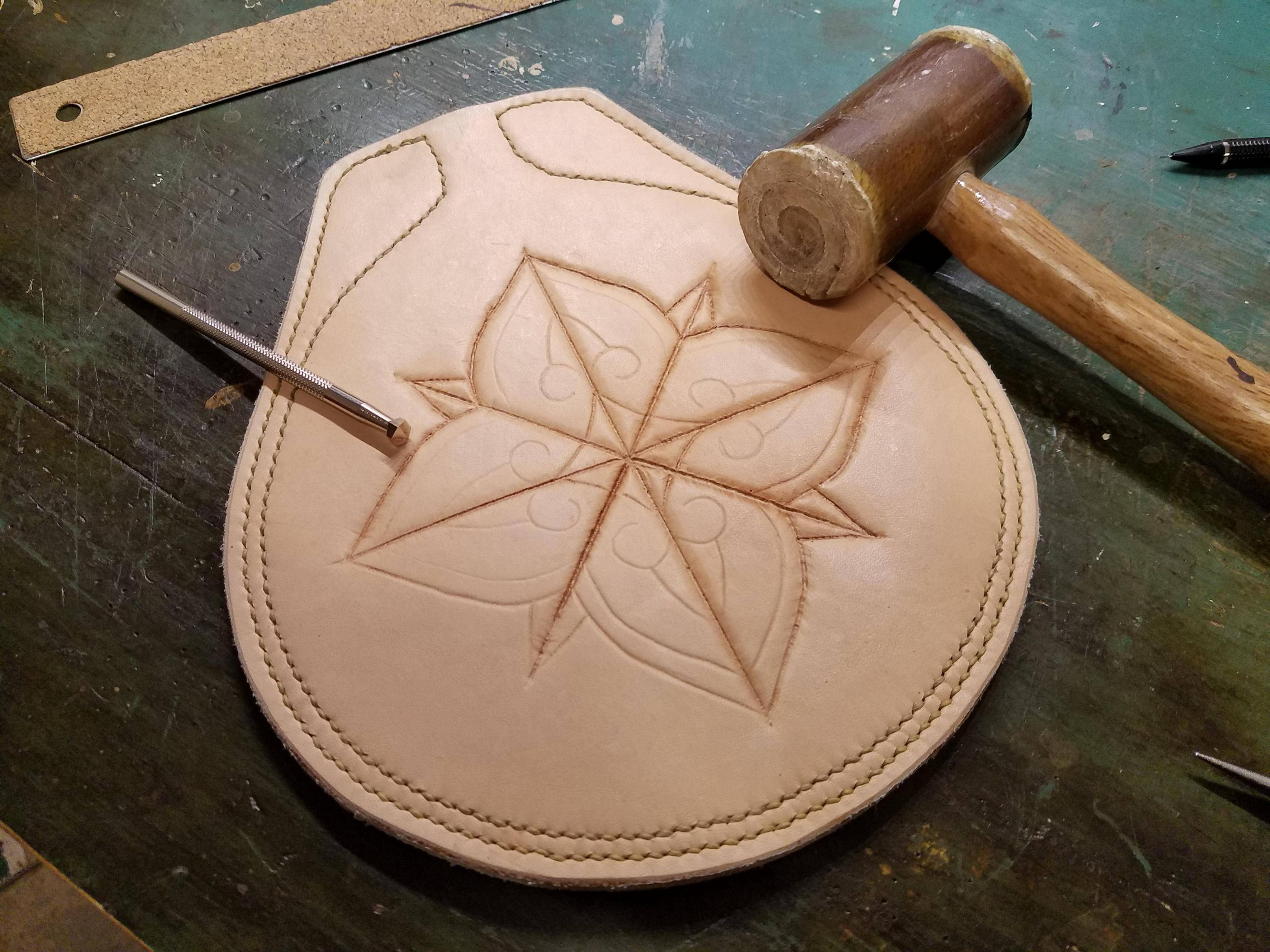 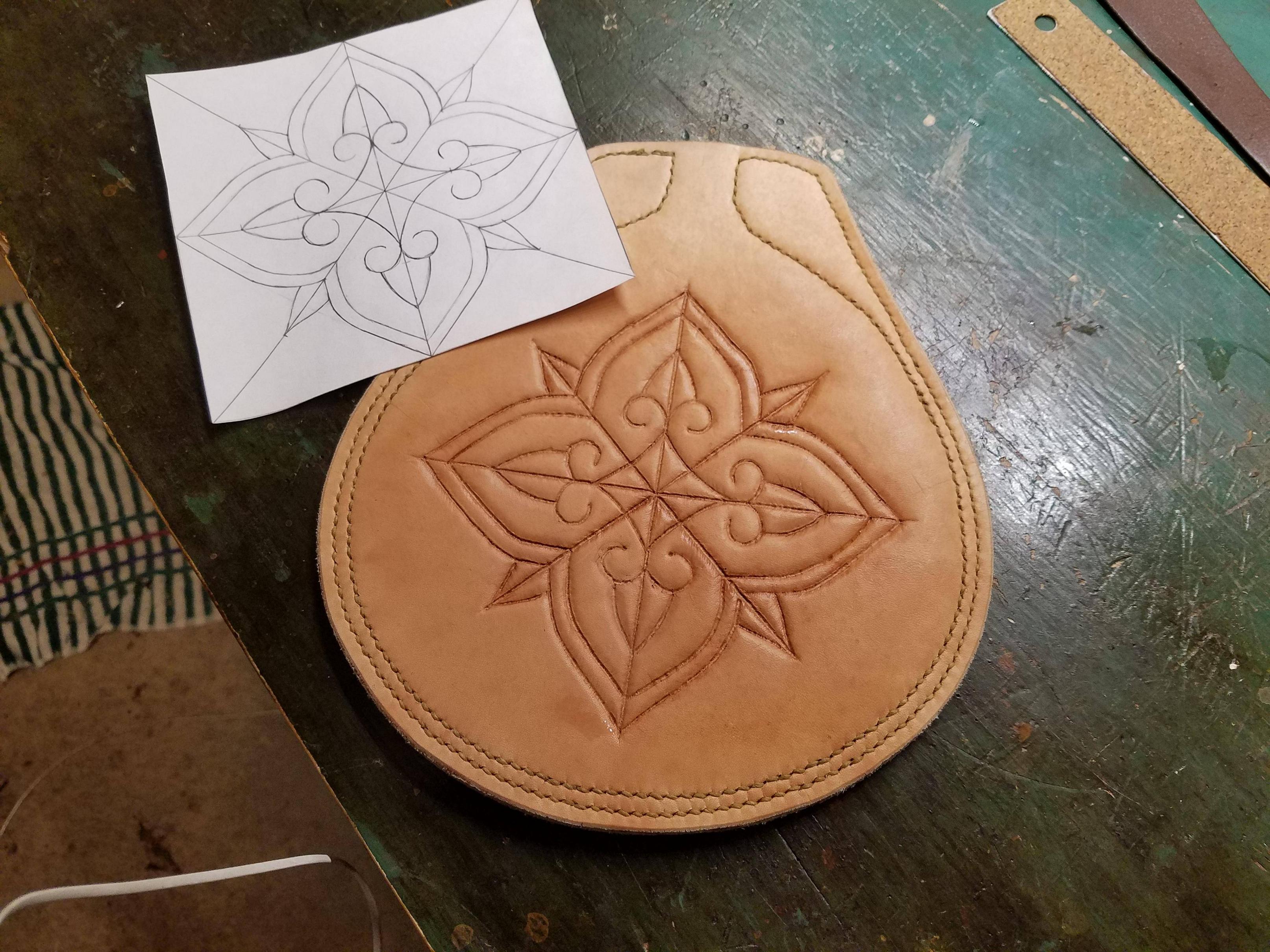 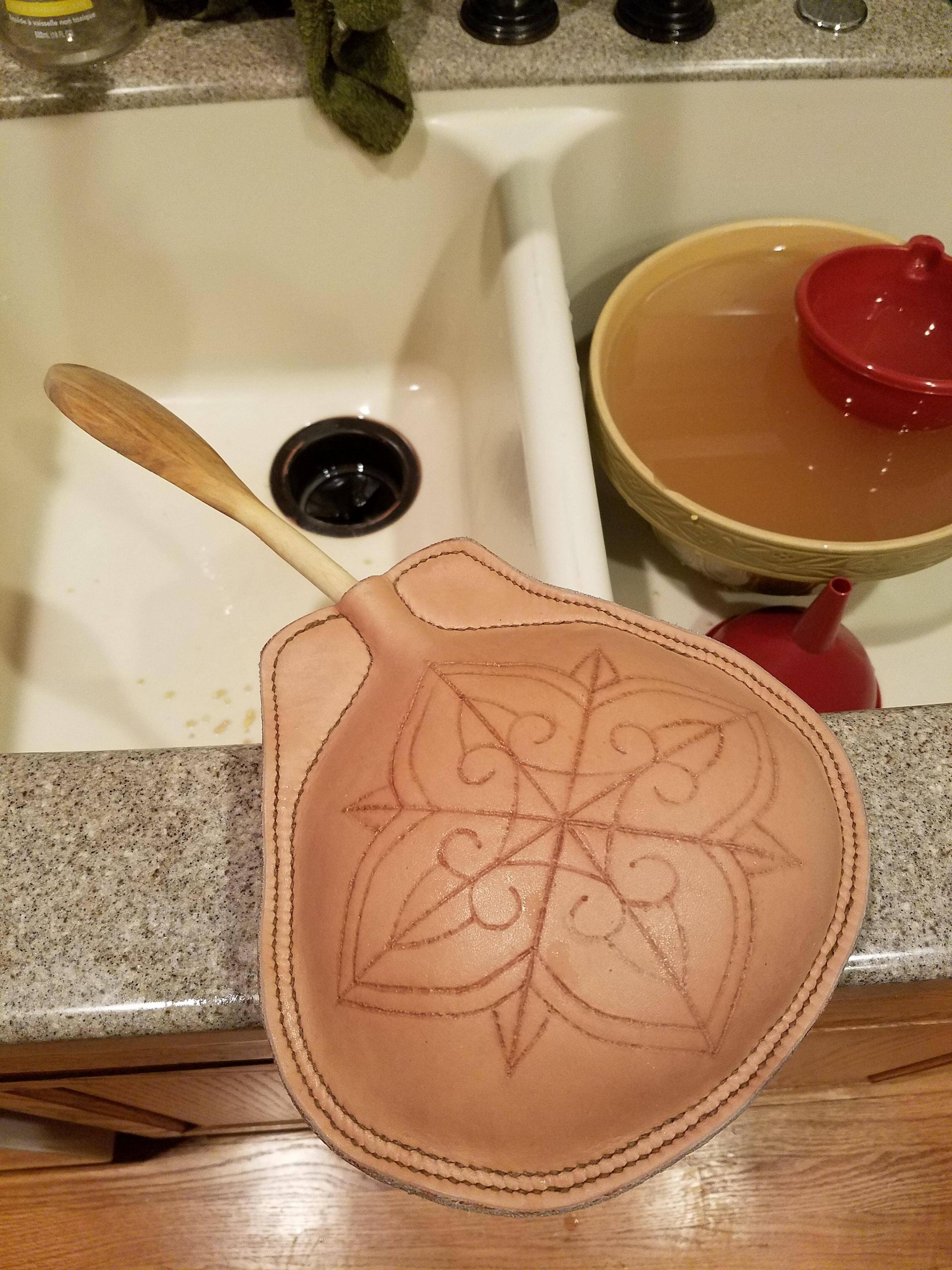 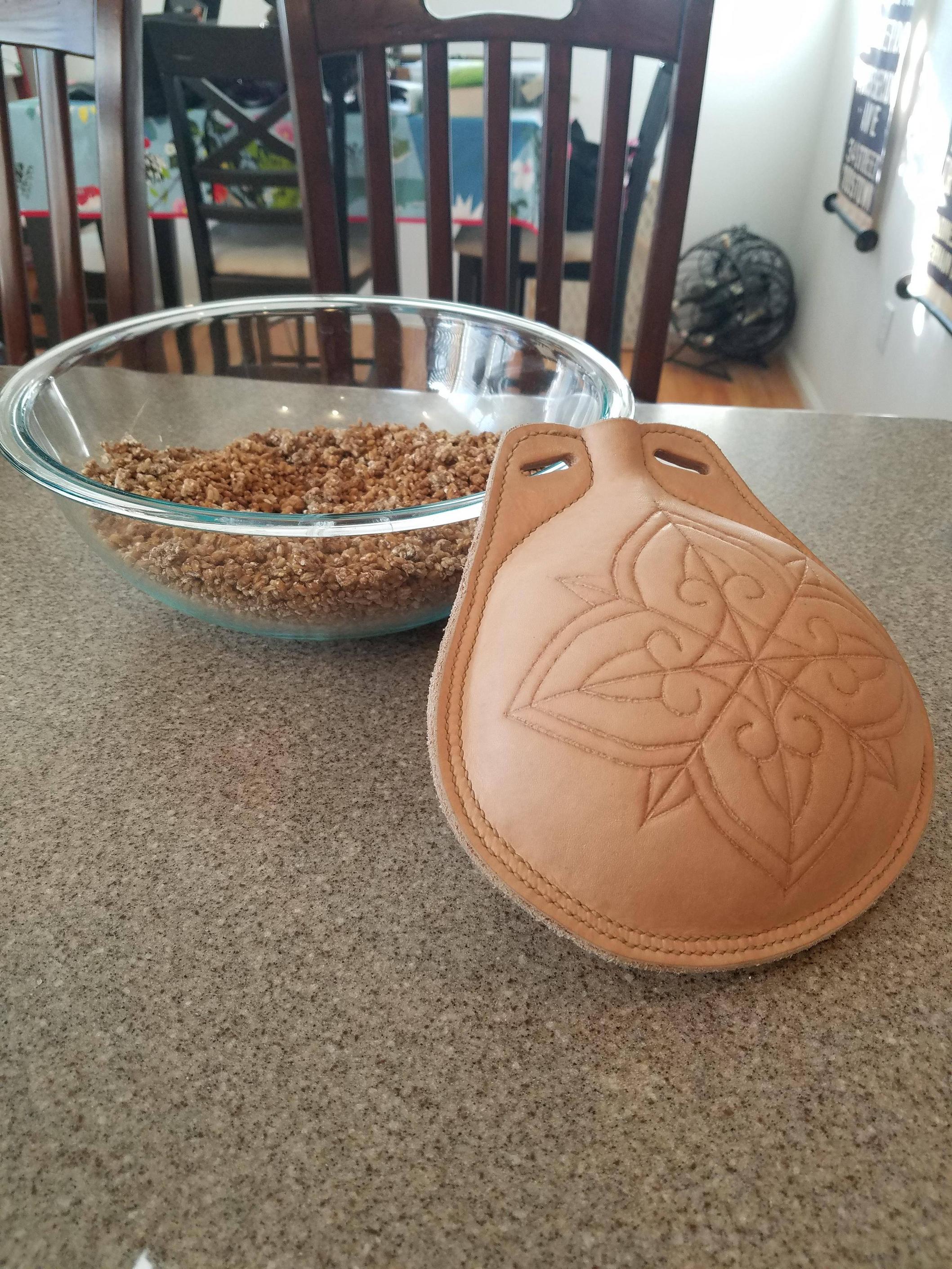 I decided at the same time to make a smaller flask for carrying something... slightly stronger, haha. The thought was to perhaps use it for an invigorating cordial of some kind - bit it had the advantage of also working well as a flask for my pirate persona. Unfortunately this one didn't stretch as much as I would have liked, and therefore doesn't hold much liquid at all (probably close to about 4 or 5 ounces, max).

Also, I should have mentioned before - both of these were hand sewn using linen thread (waxed linen from Tandy for the small flask and a heavy natural linen butcher's twine for ththe large one), and were then completely submerged in molten beeswax (locally sourced and raw, incidentally, if I recall correctly) to harden and waterproof them. Then the interiors were sealed by filling them with a traditional mixture of beeswax and brewer's pitch, and subsequently emptying them out again, leaving a thin layer coating the insides. And I have to say that so far they have proven extremely watertight! Not a single leak to be found! 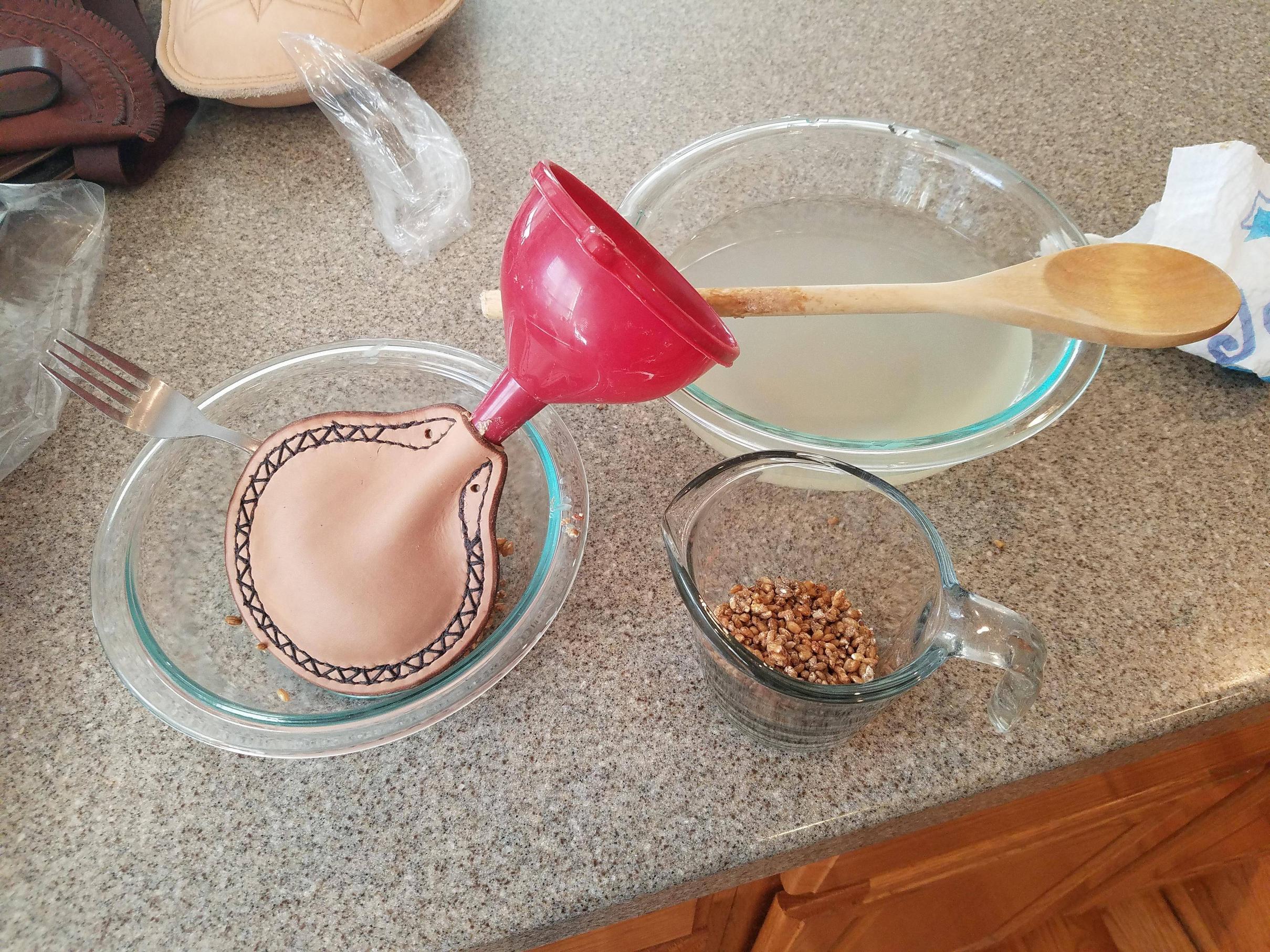 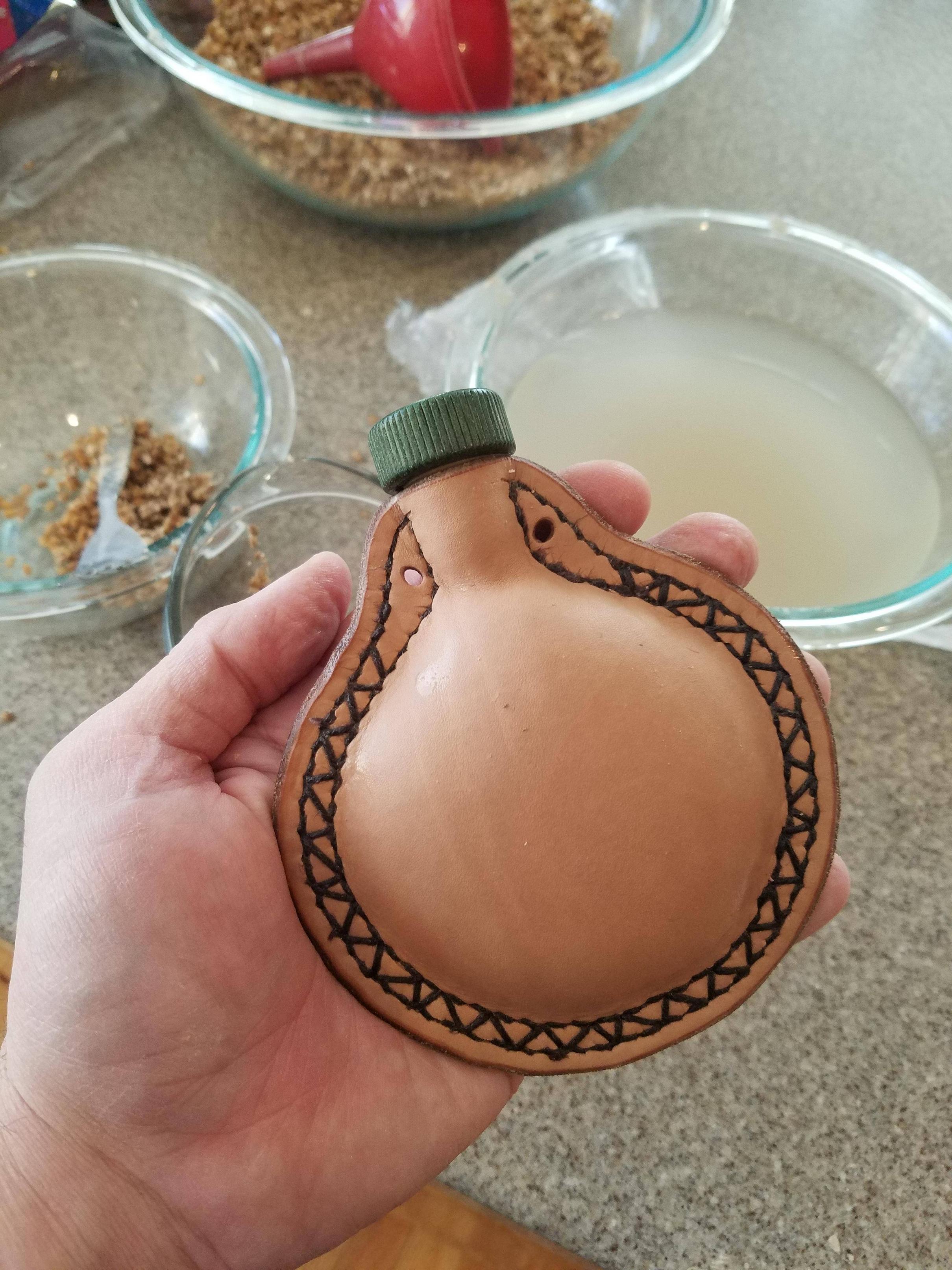 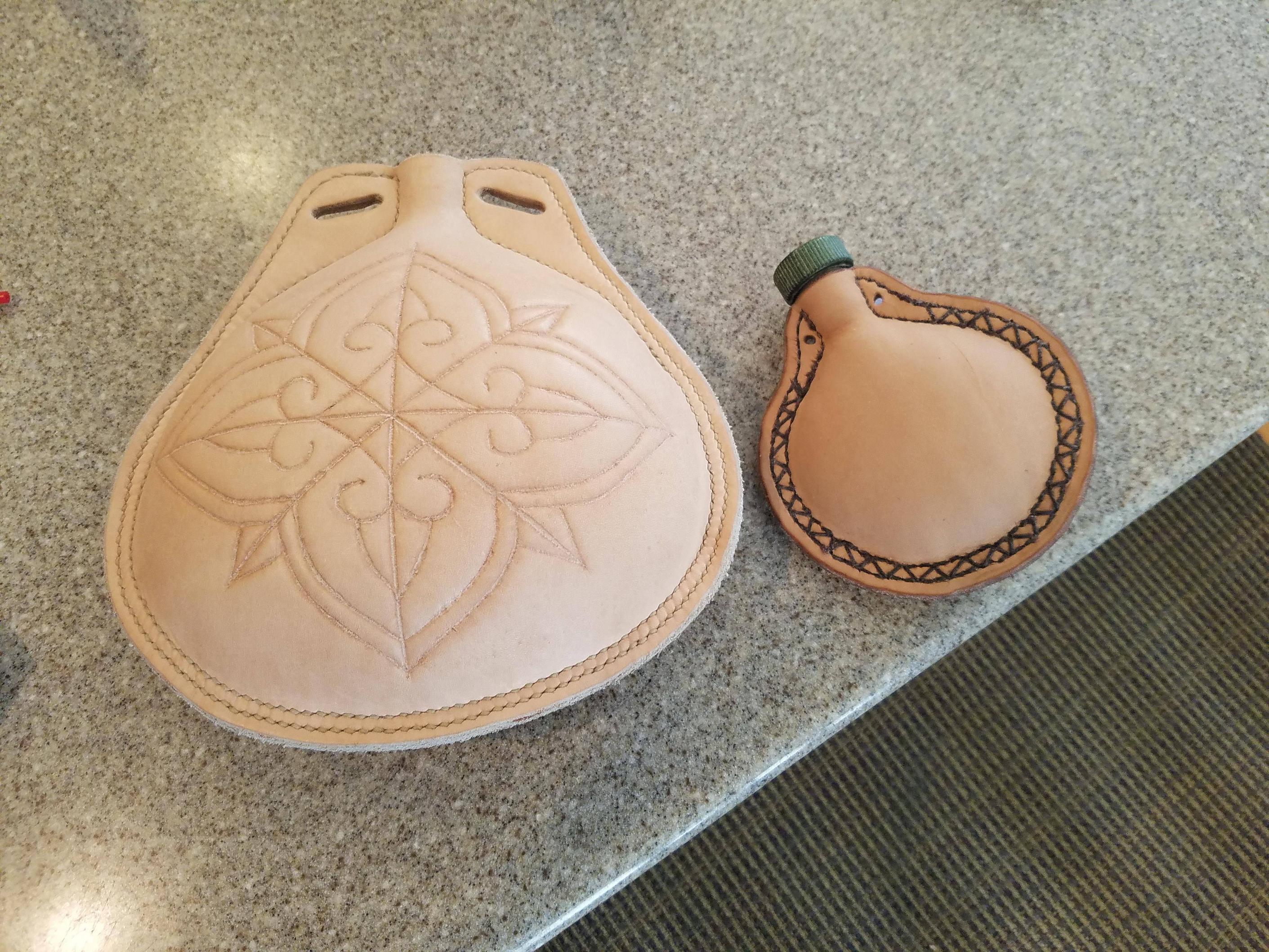 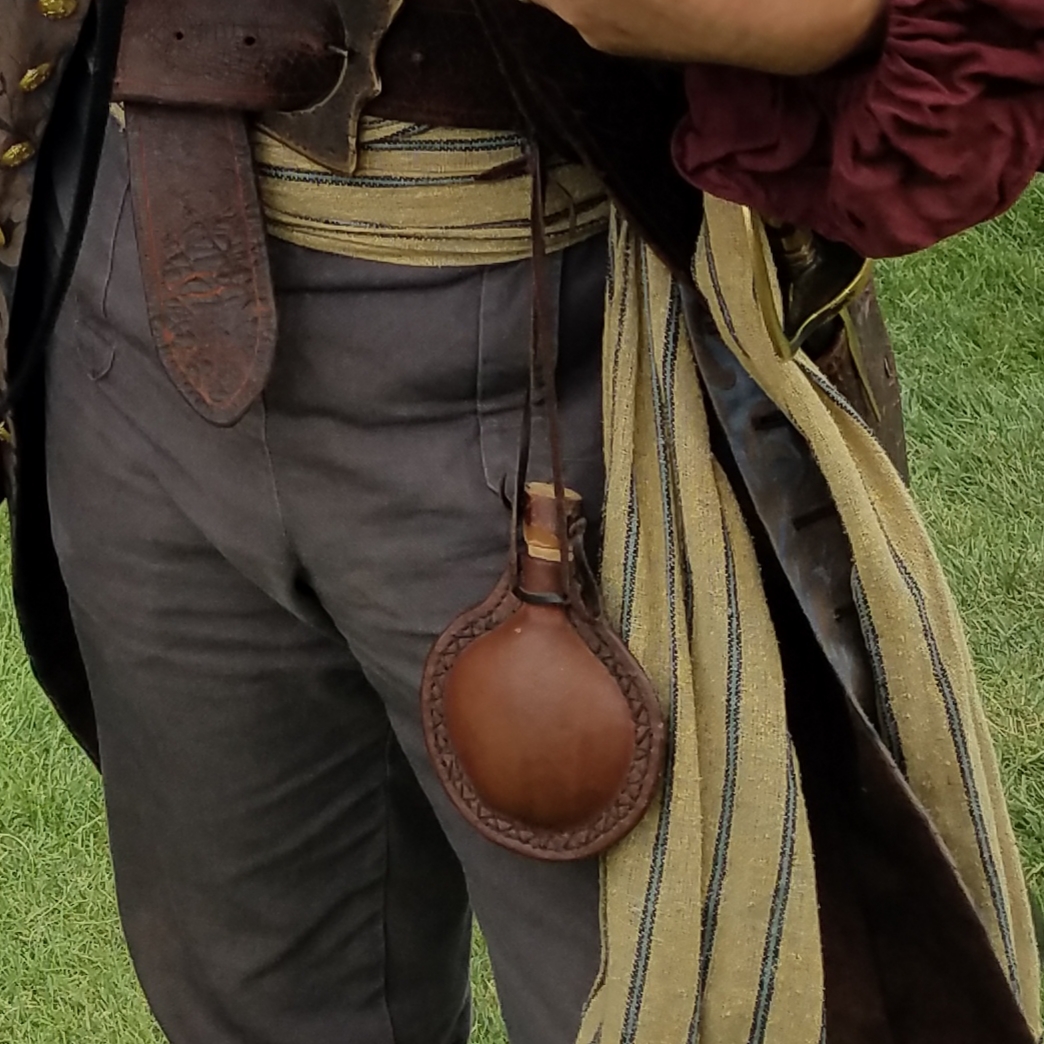 Oh those are lovely! I especially love the pattern!

... I assume they were finished in wax? Did he just have a big ol' dunking vat, or did you do something different?
Persona: Aerlinneth, Dúnedain of Amon Lendel c. TA 3010.
Top

Yeah, they were just dunked in a large double-boiler vat of the beeswax, then had the pitch/beeswax mixture poured inside to seal them.
Top

Beautiful work, but to be honest, I'm at the point where when I'm thirsty, I don't want to be imbibing small bits of wax. Maybe I'm just too clumsy.

Although heavier, when I'm on the trail, I use class bottles that have been wrapped in wicker, along with a wicker handle.
Vápnum sínum skala maðr velli á
feti ganga framar því at óvist er at vita
nær verðr á vegum úti geirs um þörf guma
Hávamál
Top

This is absolutely amazing, I love that leather tooling design

Excellent work, friend!
Now the sword shall come from under the cloak.
Top

Awesome. I'm curious to see how the block forming works out.
Top

Meant for an other thread. Oops

Thanks again, all! I'm trying to add in more little embellishments like this as I go because I think they really help elevate a kit from something that's simply hardy and serviceable to something that looks like it has a real sense of cultural weight behind it. The rangers of the Grey Company were described as wearing "no other fair thing" save for their star brooches, but I have always interpreted that to mean mostly flashy metal or jewelry, and so forth. I feel like any culture with such long roots as the Dúnedain will naturally include some common design motifs in their general garb and gear - and when people are often alone for long stretches of time with nothing but their kit for company, it's not at all uncommon for them to wile away what hours they have as downtime by adding some small decoration to it (sailors in particular come to mind). But this is probably beating a dead horse a bit at this point, as I think Caedmon, Elleth, Ursus, and so forth have demonstrated this idea quite well in their own kits.

theowl wrote:Awesome. I'm curious to see how the block forming works out.

And yeah, as for block forming, it's definitely on my list of things to do someday, but I'm not sure when or if I will ever actually get around to it. We'll see...
Top

Manveruon wrote:and when people are often alone for long stretches of time with nothing but their kit for company, it's not at all uncommon for them to wile away what hours they have as downtime by adding some small decoration to it (sailors in particular come to mind). But this is probably beating a dead horse a bit at this point, as I think Caedmon, Elleth, Ursus, and so forth have demonstrated this idea quite well in their own kits

Agreed, If you carry the equipment to do it, I think being bored is my best motivator, most of the embroidery on the tunic in this thread (shown at the end) was done sat in a motorway traffic jam: viewtopic.php?f=31&t=4062&p=43557 it's not the most middle earth of settings but it got the job done

I think I saw a picture of the tooling on Facebook, but the finished flacket is just lovely! I also really enjoy the composition of the picture with the map and the quiver - very nice!

Wayne Robinson has a blog post on using a wooden mold to make a Mary Rose flacket. It's something I'd love to try, since, as you say, it seems like a much less messy and much more consistent way to form the leather, but I don't have the shop tools/woodworking knowledge to pull it off (at least, not yet...).

I've made a couple costrels, but I've never immersed them in wax, because, well, it seems like that would take a lot of wax and a way to melt said lot of wax! Do you have any idea how much wax it took? How was it kept warm?
- Ned Houndswood, Breelander
Richmond Fantasy-Inspired Hiking and Camping (on WordPress and Facebook)
Top
Post Reply
16 posts

Users browsing this forum: No registered users and 3 guests