Here i have Gathered all the mentions or depictions of Architecture in the Vales of Anduin and Western mirkwood. Houses, homesteads and villages of this type would have been scattered all over the place in the Late Third age. One might guess that they extended to the Northern side of Mirkwood. Where the Dwarf trade (Balin takes this route, and it seems safet then the Old Forest Road.) between the west and east was routed.
It likely shared similar core things with the Northmen of Esgaroth, Dale and the alnds of the river running. Like the thatched roofs. But the Architecture of the Northmen of the East is an other topic.
So here we begin, by looking at descriptions in The Hobbit.

It is interesting that it is mentioned to be a wood of Oak, as the Vikings main wood was oak, both used in shipmaking and building of houses. Pine wass mostly used for horisontal timbering, and oak was used in Bole-house method, with hewn logs standing up.


"wooden gate, high and broad, beyond which they could see gardens and a cluster of low wooden buildings, some thatched and made of unshaped logs; barns, stables, sheds, and a long low wooden house."

It seems that both Beorn and Lake-Town has thatched roofs. This may point towards a larger trend of Northman usage of thatched roofs.
The unshaped logs can easily be intrepeted as horizontal timber logs, which are round and unshaped. It seems weird that it would refer to standing logs, ad ive never seen them being left round when in bole-house methods. 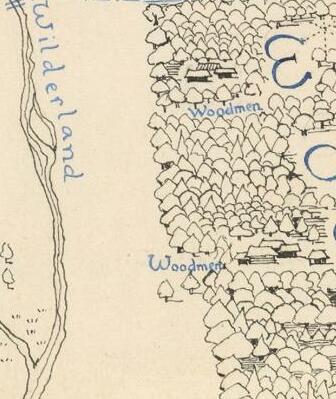 Here we have some interesting drawings of the Houses of the Woodmen, in two variants, one fully inked and the other has horisontal lines.
The horisontal lines look a lot like log houses, here is a pic of a house that looks earily similar to this one. 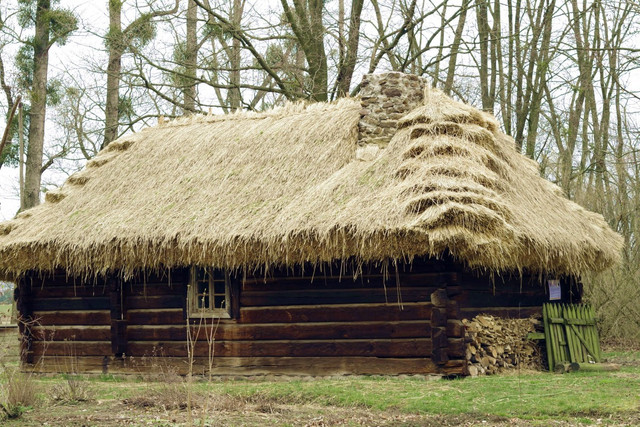 Buildings like this might be what the Woodsmen used, with logs either hewn or not. Gathered in villages and homesteads like this, maybe it is something like this that the Wolves in the hobbit wanted to attack? 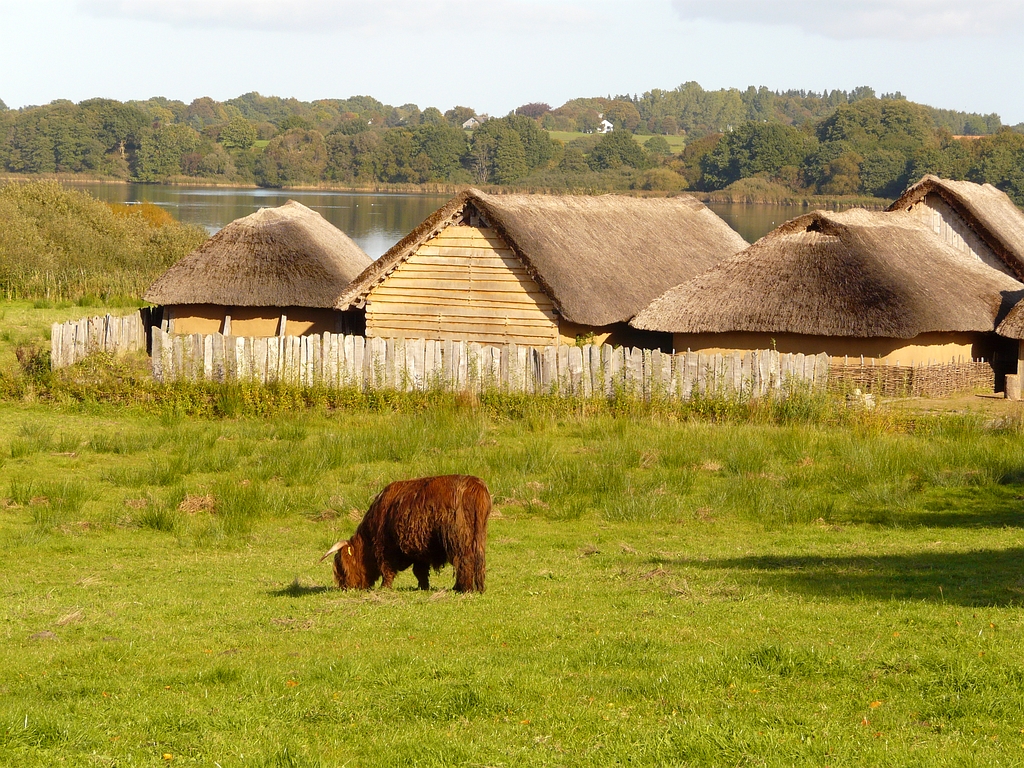 "Soon they reached a courtyard, three walls of which were formed by the wooden house and its two long wings."

I wonder how the hall was really shaped?


"Quickly they got out boards and trestles from the side walls and set them up near the fire. ..."

"which the dogs took and quickly laid on the trestle tables. These were very low, low enough even for Bilbo to sit at comfortably. Beside them a pony pushed two low-seated benches with wide rush-bottoms and little short thick legs... while at the far end he put Beorn's big black chair of the same sort.... These were all the chairs he had in his hall, and he probably had them low like the tables for the convenience of the wonderful animals that waited on him. ... The other ponies came in rolling round drum-shaped sections of logs, smoothed and polished... "

Trestle tables, of the sort of the pictures below have been used a long time across europe.
This sort: 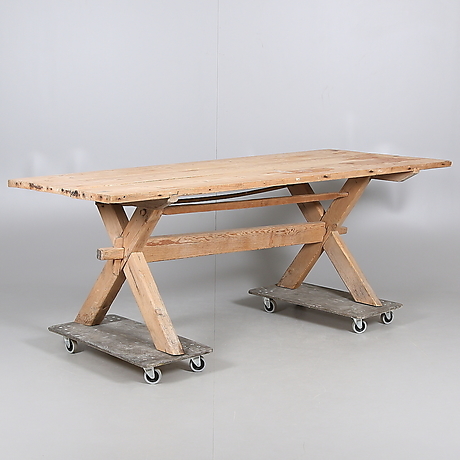 Te rush-bottomed benches are interesting, we see a similar rush-bottom weaveing on Bilbos chair in the shire. Beorns black chair also has a rush seat. Both the bench and Chair appear to have short thick legs, and the chair likely has posts of a similar kind. The blackness of it is interesting, maybe it is out of a black wood or painted with Tar?
The low log seats talk for themselves.

We have two depictions of the Hall of Beorn, and they vary a little bit. 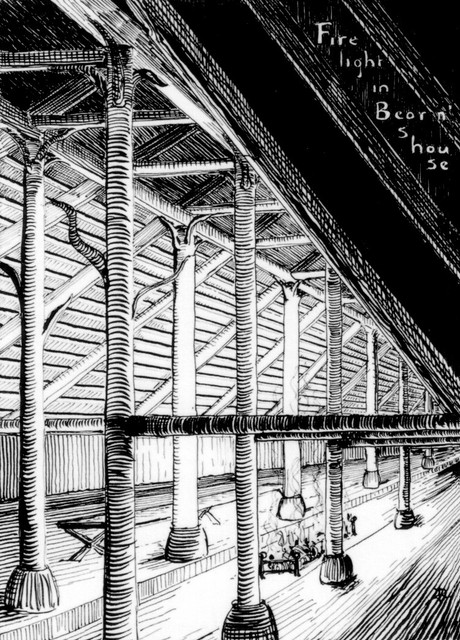 The pillars in this version have side beams, and thicker parts around their foundation. The submersion in the floor isnarrower then in the later pic. The hall itself appear to be made from standing logs, qute thin and hewn on the inside. This was a popular method for the vikings, and used where Oak was available. Either that or they are inner panels of a timber wall. This could be likely, as it would insulate from cold, and look good.
The fireplace is similar to the other one, with a guard maybe made from iron? the posts look similar to the great metal cleat at laketown, maybe they are both dwarf-made? But it says that few things save the knives were of metal at all, so maybe they are made from stone? or a hardy type of wood, although that seems unlikely. 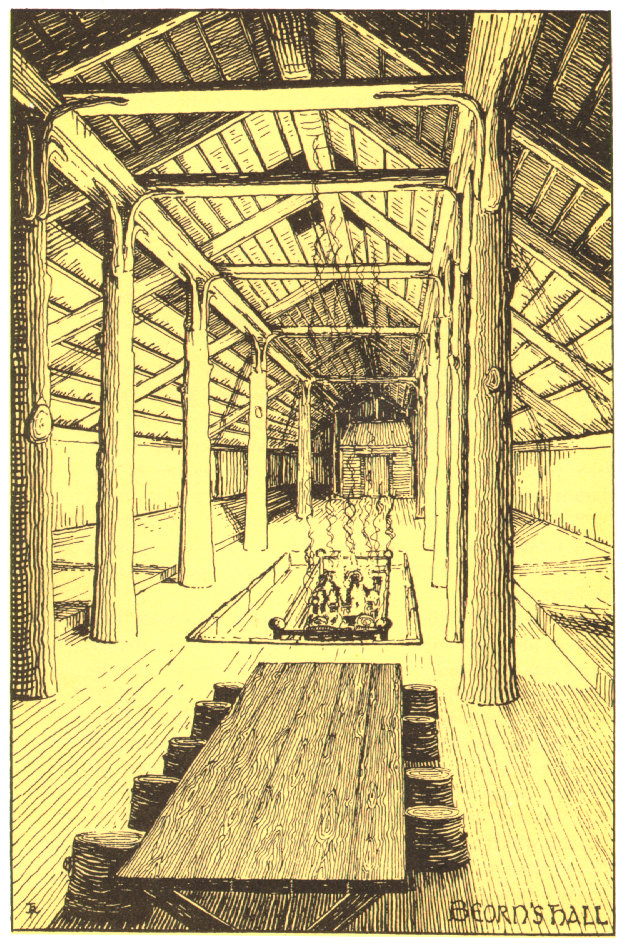 This is the later, more canonical drawing of Beorns hall. The first thing to note is that the walls are smoth, maybe due to Beorn having whitewashed them? It was popular in the halls of the Vilings, and would serve both a decorative and a functional (it is mildly antibacterial.).
The submersion is now wider, having swallowed the fundations of the pillars.
There is also a further submersion, where the firepit lay. it is lined with stones.
The table is like the one on the other pic, with X-shaped trestles who are detachable, which was the fashion of swedish peasants for well into the 18th. century.
The low drum-shaped seats are also there. But not the rush-bottomed benches and Beorns seat of the same sort.
The back also shows us a very interesting thing, what looks like a walled room, which looks like it has horisontal logs, very thin ones. It may be the private lodging of Beorn, where he keeps his bed? Or mayby a storeroom?
Last edited by Darnokthemage on Thu Nov 21, 2019 11:49 am, edited 1 time in total.
Artist, larper and history lover.
Top

The similarities between the map drawing and those photographs is surprisingly close. Wow! Great research! I'd LOVE to see Aistan standing by one of those.
Now the sword shall come from under the cloak.
Top

Thank you, going to continiue by examining Laketowns and Dales architecture, which is even harder. We only see Old Dale from long away and in ruins, nd new dale w eonly get Gloin's comments in FoTR. Thankfully old Esgaroth is filled to the brim with house shapes, so im trying to compare it to Norse Stavechurches.

No one happens to have any mentions of painted houses in the books? We have one line about the white paddles of Lake Towns boats, so if not ill have to do with that.
Artist, larper and history lover.
Top

Passing thought - do you think Laketown might have been inspired to some extent by crannog settlements?
Those might be worth mining for possible "looks kinda like the drawing" structures.
Persona: Aerlinneth, DÃºnedain of Amon Lendel c. TA 3010.
Top

Hmm, interesting... i do think they might be an inspiration in the more general sense, but i do not see much that look similar to the depiction of Lake Town.
Laketown seems largely built out of planks and hewn logs, maybe with help from watermills? One can look at Stavechurches and find many similarities, the same with viking architecture in general. Though, there is what seems to be many rectangular windors, which i would suspect would be fitted with glass windows. There is also the interesting placements of the houses, with the outmost layers being longhouses or similar, perhaps housing or Magazines.

Currently im mostly looking at Viking Archotecture, and some earlier germanic bronze age settlents. There are a lack of round huts, which seem almost nonexistent in Rhovanion.
Artist, larper and history lover.
Top

Great to see all these observations in one place! (also great that you have the wider European perspective which is more familiar with the styles JRRT is emulating.)
In one of our earlier MERS newsletters I also concluded that thatched roofs was a common Northman trait.
Off the top of my head, I can say that even though not mentioned in Beorn's hall, we know Woodmen had windows in their houses/halls:
â€œThrough Mirkwood and back again it led them, though they never caught [Gollum]. The wood was full of the rumour of him, dreadful tales even among beasts and birds. The Woodmen said that there was some new terror abroad, a ghost that drank blood. It climbed trees to find nests; it crept into holes to find the young; it slipped through windows to find cradles.â€ (63-64).

As for the lack of Beorn's chair in the second drawing, I would assume the picture is almost from his POV and it is just outside the frame at the head of the table.
Personae: Aistan son of Ansteig, common Beorning of Wilderland; Tungo Boffin, Eastfarthing Bounder, 3018 TA
Top

Would be interesting to see if it is real glass windows, or just window shutters or small openings in the wall. Would really depend on how common glass is in the region.


Om the topic of painted wood, we have references to Meduseld having painted pillars and many-coloured floors.


â€œâ€¦the floor was paved with stones of many hues; branching runes and strange devices intertwined beneath their feet.â€

Does this not sound like the many-colored roads of Dale? Perhaps there is a common ancestor in the Hall of Vidugavia?

Half-Seen colours, and white oars, seem like the Northmen do paoint their wooden objects.


"They sat long at the table with their wooden drinking-bowls filled with mead."


You better get a drinking-bowl, Udwin!
They have been used since viking times here in sweden.
Maybe Beeorn drank froms something like this? 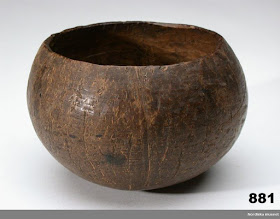 Here is a Sweden one, from the 1700s, maybe made in laketown in the same style of their boats. 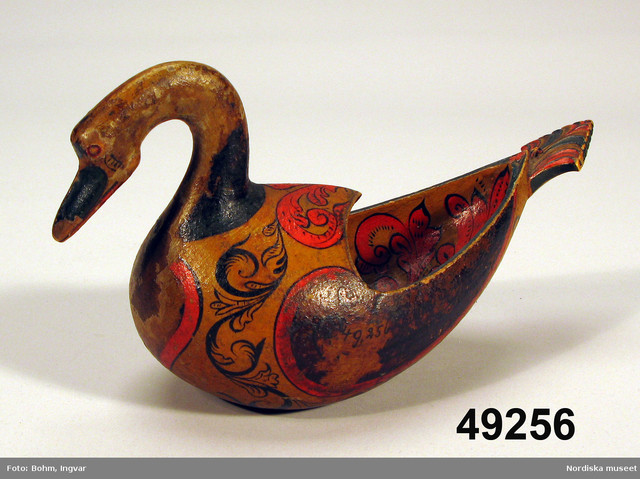 Some amazing research in this thread, nice work

For on the trail use, I made this little birch kuksa some years back. It holds I think ~5 ounces, but is nice to have for drinking from springs, or broth, or one of the exotic beers that Odigan tends to bring on the trail. It's not from burl though, just twisty grained riverbirch, so I don't trust it longterm for hot drinks.

Quite an interestinarticle related to the topic of Painted houses in Viking Scandinavia
Artist, larper and history lover.
Top

This depiction of a Nordic warrior fighting a dragon made by tolkien is not for middle earth, but we can still be inspired a lot by it. Perhaps the men of the Anduin dorn eagle feathers on their helms?
Artist, larper and history lover.
Top

Udwin wrote: It's not from burl though, just twisty grained riverbirch, so I don't trust it longterm for hot drinks.

I haven't forgotten...still keeping my eye open for a solid burl at work!
Now the sword shall come from under the cloak.
Top

Mycket intressant. Some...odd ideas about authenticity, from my perspective. Paint the hall a wild variety of colors to reflect different timeperiods? Isn't the usual word for that "anachronism"?

In any case, the quicklime whitewash seems the safest bet, perhaps with some colorful highlights.
Top
Post Reply
13 posts • Page 1 of 1