After finding the scapula a bit flimsy, I ordered up a Niwaki digging knife. 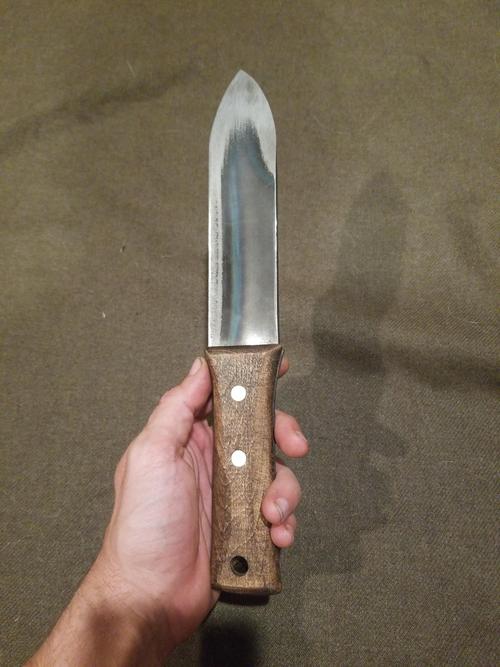 It's serviceable, and looks a lot more period than the ones with logo-etched stainless blades and serrated edges. I subdued the handle a bit with black walnut minwax stain, and am making a black walnut sheath for it.

It doesn't seem as durable as I'd like. The blade, thick as it is, seems rather more malleable than I'd like, and I managed to bend it slightly digging a small hole. It bent back easily enough, but that's not exactly a point in its favor. If the steel's that soft, I don't know how much of an edge it's going to take. I plan to give it a good long trial, but I can hardly recommend something so flimsy at this point.
Top

TL;DR: filling a hole with fire and sleeping on it works way better than you'd think.

Last night I spent my first full night out in full kit. I'll be posting a video of the outing, but one thing I wanted to share was a way of using a Dakota Firehole that I haven't seen before...maybe for good reason.

I've seen lots of designs using fires to keep warm through the night: long fires, self-feeding fires, and some very labor-intensive seeming methods in which you bury the fire or stones heated in the fire and sleep on top of that to keep warm.

I'm not saying no one could pull these off, but they all seem so...finnicky.

Well, after last year's trip to Japan I've been pondering a better way, and can now confirm that it works...exactly how I envisioned, which is kind of wild.

Basically, this takes the concept of the Dakota Firehole and merges it with the concept of a traditional Japanese kotatsu. A kotatsu is a low table with wide insulating skirt running all the way around it--basically, a coffee table with a blanket for a tablecloth. Modern kotatsus have an electric heating element on the underside of the table which warms the air under the blanket, along with the legs of anyone sitting at the table. You can even scooch further under and warm your whole body, depending on the size of the table. 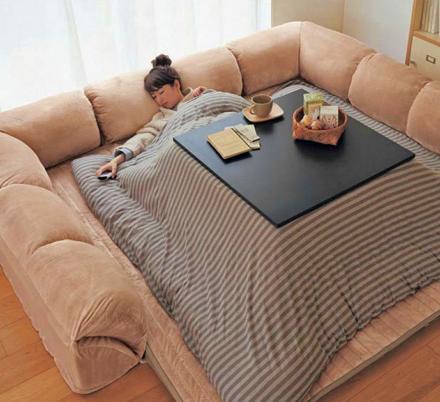 Traditional kotatsus didn't have electric heaters, though--instead, they had a pit set into the floor under the table that held burning charcoal. 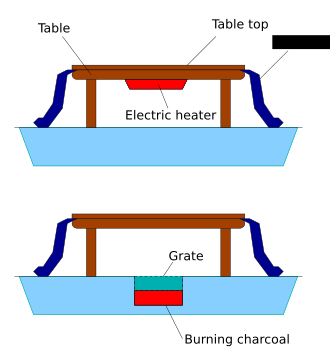 That is...kind of a wild concept. Just sleeping with a pit of burning coals IN your bedding? That sounds crazy. I had to try it.

I've previously mentioned that a Dakota Firehole is very cozy to tent your cloak up over. Well, what if you just...slept on top of that bad boy?

So, on day 1 of my outing I dug a firehole and just kept feeding that sucker the biggest branches I could, kept it roaring at full bore for hours, with the express intent of building up as deep a bed of coals as I could in the bottom of it. As night fell, I cooked dinner , then went back to burning that sucker like crazy. I probably had a 6" (15cm) deep bed of coals in the bottom of my 8"-ish (20cm) wide hole. That may not sound like much for hours of burning, but remember that this thing burns WAY more efficiently than an open fire, and basically just eats twigs. I then slept over the hole with it right between my thighs and my wool blanket over the top of me.

It worked GREAT. It was downright hot at first, and despite the sub-freezing temperatures I was warm and happy right off the bat. As the coals were blanketed with ash, they cooled from lack of airflow, and I was able to close my legs over the hole without burning the backs of my thighs. Eventually, the ash got thick enough that heat production slowed down and I started feeling chilly. I sat up, stirred the hole with a stick to bring fresh coals to the fresh air at the surface, and the cycle repeated. I had to stir the hole about once every 3 hours, an operation which took 30 seconds, max, and unlike stoking a fire it took no finesse or concentration. I was warm until morning, sleeping on the ground in the open with just a wool blanket and cloak in sub-freezing temps. I was blown away by how well it worked and highly recommend it.
Top

That's very neat, and I'm very impressed that you picked a below-freezing night for your first overnighter in full kit!

I saw a video a while back about a similar trick, apparently used by Simon Kenton in the late 18th century. According to "Simon Kenton: His Life and Period: 1755-1836" by Edna Kenton, "he knew the properties of white oak bark for burning without smoke and for retaining heat. He found his tree, stripped its bark, and sat down before it. Between his spread legs he dug a hole in the ground not larger than his head, and in it he 'criss-crossed' fine strips of bark until it was filled. Then under he blanket he 'made fire,' and when the little pile was glowing he covered it with earth, leaving two air holes for draught. Then he went calmly to sleep, sitting against the tree..."

White Oak bark specifically as being smokeless and heat-retaining? Time to go test some bark!
Now the sword shall come from under the cloak.
Top

Greg wrote:White Oak bark specifically as being smokeless and heat-retaining? Time to go test some bark!

I haven't tried it, so it could be hooey! If you do give it a go, be sure to let us know

Taurinor wrote:I'm very impressed that you picked a below-freezing night for your first overnighter in full kit!

"Picked" might be a strong word. Up to now I haven't dared build a fire around here (California), so camping earlier in the year was a no-go, even though my kit was ready. And I didn't know it would be sub-freezing until I checked the temperature logger I'd left in my car the next morning.
Top

So I've posted the results of this a bit around the internet. There were a LOT of suggestions to "Just use a hot water bottle".
Apart from the fact that hot water isn't workable in a flacket, this suggestion seemed to be missing the point, so I decided to do S C I E N C E .

I've used hot water bottles a lot with modern camping, and they're great for warming up when you get into your sleeping bag...but how much energy does that actually hold?
Water has a really high volumetric heat capacity. REALLY high. Some folks on the internet have suggested using rocks warmed in or beside the fire instead of a hot water bottle, but in order to give off as much heat as a liter of boiling-temp water, an equivalently-sized rock would have to be heated to 398Â°C (748Â°F), which is just under the melting point of zinc. Even a wool blanket's not going to tolerate that kind of abuse, let alone a nylon sleeping bag.

So if water's so good at storing heat, how does it compare to a little pit of charcoal? Well, if we assume the bed of coals in my firehole was about the size I estimated in my previous post, but that it was quite low-density and only occupied half the volume I stated (the other half being either ash or air), then that's about 400g of actual charcoal--a little less than a pound. Burning that much charcoal would give off 12 megajoules of heat

Since the specific heat of water is 4.18 J/(gÂ°C) and there's a delta of 63Â°C between boiling point and body temperature, this means you'd need about 45 lites or 12 gallons of boiling water to give off the same amount of heat as my little pit of charcoal. And don't forget--you'd have to heat that water up somehow, first.
Top

How about throwing some rocks into your under bed fire pit. Once the stones are heated they should give up heat a little longer so you won't have to feed the pit or stir up the coals as often, giving you a better.
Top

Peter Remling wrote:How about throwing some rocks into your under bed fire pit. Once the stones are heated they should give up heat a little longer so you won't have to feed the pit or stir up the coals as often, giving you a better.

Rocks are actually comparatively terrible at storing heat. The specific heat of water is 4.18 J/(gÂ°C) as mentioned above--but granite's specific heat is 0.28J/(gÂ°C), about 1/15th as much. Even accounting for their different densities, water holds more than 5x as much heat by volume as stone does. Meanwhile, the charcoal in the hole is 100x more energy dense than those rocks, by volume.
Top
Post Reply
28 posts