Non-Tolkien Rangers, you say? Here's my loadout as John Gage, a frontier Ranger for the New California Republic.

For those of you who aren't familiar, the NCR is a faction from the post-apocalyptic computer game Fallout: New Vegas. The Rangers patrol the wasteland that used to be California as well as parts of Oregon and Nevada. 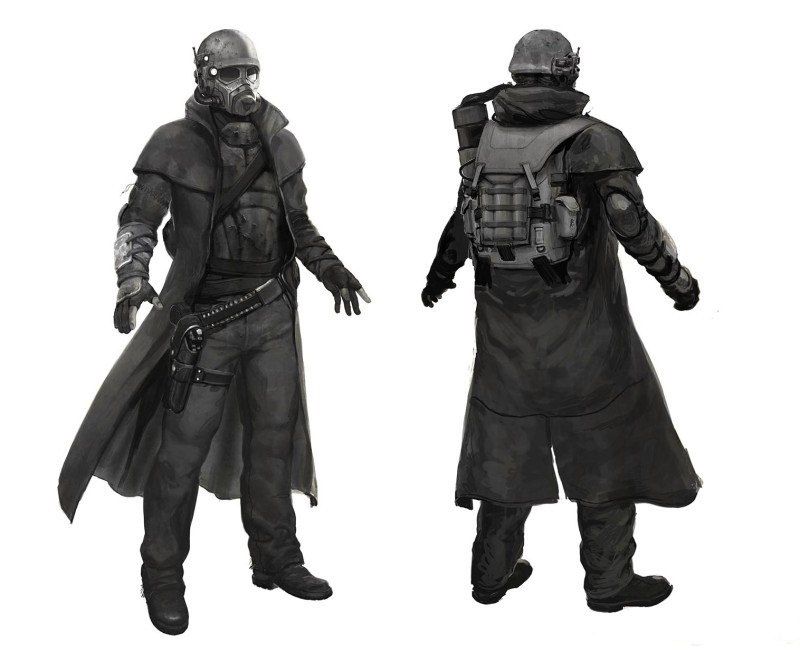 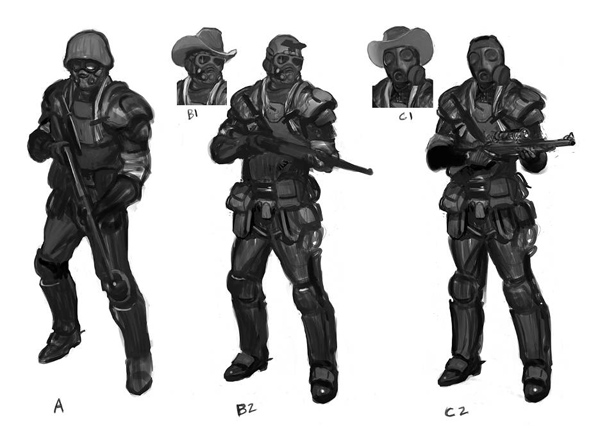 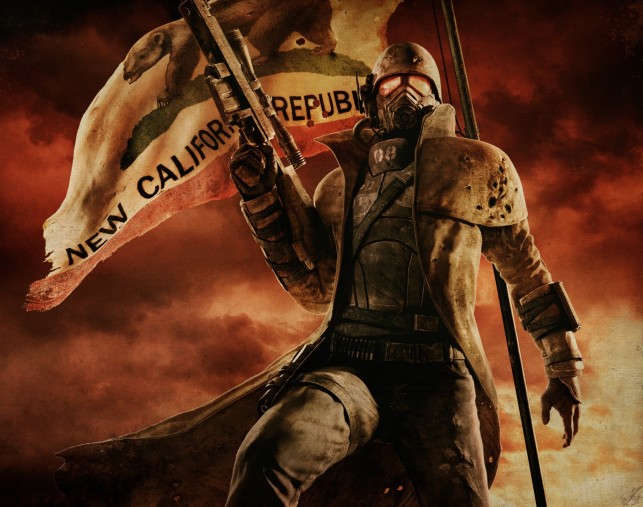 It's obviously not a perfect replica of the rangers from the game, but I prefer a functional equivalence over exacting aesthetic perfection.

In that interest, here's my kit: The backdrop is my bedroll, a wool blanket. You can see it strapped to the outside of my rucksack in the above images.

The bag itself is a MOLLE rucksack. Not exactly in keeping with the retrofuturistic feel of the game, but fairly in line with the more modern concept art above.

The duster is oilskin, getting a bit threadbare but still the longest-lasting raincoat I own.

The belt is a web belt with a hardened steel quick-fit V-ring of the type often used in parachute rigging. It's extra-long so I can loop it under my butt to make a makeshift climbing harness.

The gloves are trigger mitts, basically mittens with the trigger finger separated for shooting and general dexterity.

The neck gaiter is a 2'-ish tube of tissue weight rayon. It can be arranged to fulfill the purposes of balaclava, scarf, bandanna, keffiyeh, mosquito net, headband...pretty much whatever. Light enough to be cool in hot weather, but adds a little extra warmth when it's cold out.

Not pictured: Gaiters of the non-neck variety. If there's one thing I've learned hiking the Wasteland, it's that sand, pebbles and twigs in your boots are murder on your feet.

John Gage's dogtags are also there, but hidden in this picture.

The chain shirt is 22lbs of 12ga steel. It won't stop a bullet, but it will stop a Legion javelin or tribal's tomahawk. Even a supermutant bumper sword would have a hard time getting through it. (Not really a Fallout-style armor, but it's the closest I've got.)

The rad mask is an Israeli military surplus gas mask. It's currently attached to a filter cartridge of my own device, intended for straining out particulates (I.E., for working with fiberglass and sawdust around my workshop). It also has a tube leading to a hydration bladder so that one can drink without removing the mask in the event of a rad storm.

The varmint rifle is a .22 caliber breakbarrel pneumatic. It's not as powerful as a gunpowder weapon, but the ammo's a lot easier to make and it's virtually silent. Plus, several thousand rounds will fit in the hollow stock.

The machete is a modified 14" butcher's knife. The rifle's great for hunting and bluffing, but it'd take a lucky shot to stop a chem fiend or ghoul. The machete's a better weapon when it comes down to it, and a good tool besides.

The bush knife is 7" of heavy, heavy steel. It'll carve, skin, pry, and do much else that the machete won't.

Between the knife and the machete you can see a hone with a bakelite handle for maintaining the edges.

The chems are the usual assortment--MedX, RadX, Buffout and a few Stimpacks. I've got some Mentats in there, but haven't ever needed to use them. They're for altitude sickness or emergencies; don't want to become a chem fiend. (In reality, it's a fairly standard first-aid kit)

The Candle Lantern is nice. Energy Cells are a rarity on the frontier.

In the game, one uses hairpins to get into pre-war ruins. I find lockpicks a lot more effective.

The cook pot is nothing special; a stainless pot with a lid so I can use it on a campfire. Also pictured nearby are a camp cup and a spoon.

The spirit stove is preferable to woodfires on short patrols. It burns clean with no light or smell and runs on moonshine. Pictured nearby is a ferrocerium striking rod for lighting the camp stove.

The canned food is to supplement any game that can be taken on patrol; radroach and bloatfly meat, mostly, but occasionally a gecko or molerat.


I don't know if any of you are the right combination of nerdy to enjoy this post, but I figured it was worth a shot. Cheers!
Last edited by SierraStrider on Wed Jul 20, 2016 5:25 pm, edited 1 time in total.
Top

Ha! Yes, I've known some good ol' boys that keep most of that stuff in their pickup just on general principles.

(The geek + redneck intersection is a fantastically fun one, isn't it? )

Anyhow - I don't know the game and post-apocalypse isn't really my cup of tea, but that looks really well put together!
Did you make the armor just for this presentation, or is it swiped from another project?

(edit - I'm reminded of the old "Postman" movie w/Kevin Costner from ages ago: as I recall they used a similar sort of old-and-new, patched-together ragamuffin aesthetic that worked surprisingly well. It's neat seeing how "in universe" people keep modern clothes going as long as they can - and still find nice ways to splash them up a little when all the stores are gone.)
Persona: Aerlinneth, DÃºnedain of Amon Lendel c. TA 3010.
Top

Peter, I think there's a reason it's reminiscent of a bug-out bag--it's totally my bug-out bag (minus some of the aesthetic flourishes).

Elleth, The armor wasn't specifically for this kit, no. I didn't have anything in particular in mind when I made it, just wanted a mail vest.

As for The Post Man, I've never seen the movie, but I very much enjoyed the book.

And I'm sure I don't know what you mean by 'redneck'. I assure you, when I shoot a ground squirrel for dinner, I prepare it in the most high-falutin', cosmopolitan manner you've ever seen. I'm sure if folks tried it, they'd say, "Wow! This is the kind of ground squirrel I'd expect at a big city restaurant, prepared by a classy and erudite chef. I can't imagine this being made by a barefoot country boy!"
Top

SierraStrider wrote:Peter, I think there's a reason it's reminiscent of a bug-out bag--it's totally my bug-out bag (minus some of the aesthetic flourishes).

Elleth, The armor wasn't specifically for this kit, no. I didn't have anything in particular in mind when I made it, just wanted a mail vest.

As for The Post Man, I've never seen the movie, but I very much enjoyed the book.

And I'm sure I don't know what you mean by 'redneck'. I assure you, when I shoot a ground squirrel for dinner, I prepare it in the most high-falutin', cosmopolitan manner you've ever seen. I'm sure if folks tried it, they'd say, "Wow! This is the kind of ground squirrel I'd expect at a big city restaurant, prepared by a classy and erudite chef. I can't imagine this being made by a barefoot country boy!"

Yup, I hears he even has a way of folding the skin so it looks like one of them napkins that stand up in a restaurant but with fur on the outside. Ya just tuck the tail in the collar o your shirt an have at it.

Interesting!
You should really check out The Postman...it's even set in the same kind of environment (postapoc American north/west). Of course, it has all the hallmarks of a 1990s Kevin Costner film, but it's pretty solid. Wonderful musical score, if nothing else.
Personae: Aistan son of Ansteig, common Beorning of Wilderland; Tungo Boffin, Eastfarthing Bounder, 3018 TA
Top

Oh my stars, that sounds positively heavenly! Just the thing for after a long promenade!

I second Udwin's recommendation: I think you might like it. At least the staging and costuming anyhow.
It kind of reminds me of the western part of "The Last of Us" as well. (Never played the game, but saw the cutscenes as a narrative on youTube)


Purely on style points, I do like the hodge-podge look in this genre of a base of traditional 19th c. ish outdoor gear, some modern goretex and such, and bits and pieces of military accouterments - it reminds me of the Alaskan bush.

That would fit in great at Wasteland Weekend.
There are no safe paths in this part of the world. Remember you are over the Edge of the Wild now, and in for all sorts of fun wherever you go.
Top

Kortoso wrote:That would fit in great at Wasteland Weekend.

Udwin and Elleth, I'll definitely give it a watch. Thanks for the recommendation.

Kortoso, that looks pretty freaking cool. I might have to think about attending.
Top

There is a group called the Ozark Wastelanders here in Arkansas, this would be a great kit for that.
You can't take the sky from me.
Top

*Grumble grumble* file size is too large. But I was gonna attach a pic of me in my NCR trooper outfit lol
(INSERT WITTICISM HERE)
Top
Post Reply
12 posts • Page 1 of 1