From the Blue Mountains to the Iron Hills...

Finally getting back to creating and enjoying nature. As I venture back to middle earth I have been thinking on my persona and how I want to rebuild my kit.

Currently working with the idea of fleeing the Lonely Mountain after smaug arrived, and working as a traveling blacksmith that works with jewels on the side.
I am going to try and keep to the more norse looking garb and kit but not necessarily 100% historical. I want to add some fun elements in that I feel make sense.

First project is going to be a pack. I want to build a pack frame with a leather cased linen pack. I don't plan to do any fast hiking and want more of a day to day useable pack. Below is my general idea.

I will be starting with felled trees and hope to work in all hand tools to make the frame. The bag section will be hand sewn leather and linen. I hope to make the smaller hardware bits and possible cast some embellishment.

Currently I have no gear, I am starting completely over and having to work around several medical problems that have come up. We had a house fire this spring that was a complete lose. I have also found I have several immune diseases, and lung problems. I want to be as close to accurate in middle earth as I can but will have some medical exceptions I need to build around.
Top

Very very nice stuff. I'm really looking forward to seeing that pack. It does strike me as quite Dwarven and reminiscent of some of the Professor's own drawings. I personally like a simpler background and I think an itinerant blacksmith and jeweler works wonderfully for a Dwarf.

I'm sorry to hear about the loss of your house. A misfortune of that scale is always a sorrow. As for the medical issues, the number one priority in this hobby is to stay healthy and safe. I see absolutely no issue with carrying modern medical supplies in your kit with medical exceptions at all. I myself carry quite a few modern tools (first aid kit and GPS amongst others) when out hiking. Safety first.
Persona : Cimrandir - late 3rd Age Dunedain
Top

You may be interested in this video. Crimber Bushcraft. Making a Viking packframe. The stuff for the pack starts at about 28 minutes in.
https://www.youtube.com/watch?v=zaNDcsgJ2xQ
I really recommend the Crimber channel all around. Tons of great and relaxing videos of his Viking style bushcraft with lots of build or tutorial videos. His videos go back 5 years ago and it's really interesting to see his progression from modern bushcraft, working his way back to Viking gear.
Top

redhandfilms wrote: ↑Tue Nov 22, 2022 3:41 pm You may be interested in this video. Crimber Bushcraft. Making a Viking packframe.

I started the pack frame idea off of his frame and coalcracker bushcraft on YouTube. I really enjoy Crimbers videos, he gave me the idea to start from felled trees instead of milled lumber. I think I may watch his video again as I get my boards worked out.

I did find several felled trees that may work. I have found that the burr and black oak are a little harder to work with and have switched to making pine boards. I think I may make the cross braces out of oak yet, but use branches that I can clean up.
This is my first time whittling anything out of wood.
Top

May I suggest pine, ash, larch, chestnut, linden, alder or walnut as lighter woods then oak.
I'm assuming you want to carry your pack rather then curse it.

Other then that I'll await your vision of a pack...... If only to steal the best parts for my own

Sullu iglukhul ya bark ra targ. (All is well with axe and beard.)

sorry it took me so long to reply to this thread, but your idea so far looks really cool, can't wait to see more

First - oh no! I'm so sorry to hear about your house fire! That's terrible.

... though I can see why building around the flight from the Lonely Mountain resonates. That's a level of depth few of manage, I think! Oof.

Anyhow, as to packs and frames - there is a wonderful wonderful thread a while back with sketches of Dwarven clothing and kit drawn largely from the Professor's own drawings. This might be worth a look-
https://www.middleearthrangers.org/foru ... php?t=4300

... taken from this sketch of the Dwarves in the Hobbit, I think on their way from Beorn's to Mirkwood. (Which granted does leave some ambiguity as to whether the packs are of Dwarvish or Beorning make)

Regarding the drawing you posted - neat! There's a few videos on youTube about making "Trapper Nelson pack frames" that might be of help in making the frame. This is one -

Also, this Hjuringsmeis is another pack frame idea I just adore the looks of, but have never had a chance to try -

... though I could also imagine a dwarf in flight might have a more improvised packframe with simple lashed boards... can't recall the name of that one? I know the bushcrafters were big into it not long back, and I think Kramer made one?

Finally, regarding pack material... there used to be a linen canvas on the market I liked, but it's since been swapped for another material (under the same product code!! grrr!!!) that doesn't work as well. But I've come to prefer hemps for packs anyhow - the material just seems a bit more weather- and abrasion- resistant. Here's what I use now, for what it's worth -

HempTraders CT-C18 100% Hemp Canvas - Weight: 16.5 oz.
https://www.hemptraders.com/CT-C18-p/ct-c18.htm
(If anything, I'd expect hemp to be more available on the east side of the Misty's, though I doubt it was unknown in Eriador proper)

Finally, one note on the drawing you linked has a pack with a drawstring in a channel. Something I learned the hard way is that either than channel needs to be very wide, OR you'll need to string the cord through eyelets instead. With a relatively narrow drawstring channel - especially with heavy fabric like in a pack - the cloth just bunches up so much you can't really get the bag closed.


You've got a neat project - I can't wait to see what you do with it!

That pack is still amazing Elleth

and a note on materials: that canvas great, it's stiff enough to give the bag structure and not too over heavy, but I do still put a sturdy piece of waxed canvas tarp down the back on the inside because it seems to need that to keep it's shape when it's filled, also the bonus of stopping hard objects from sticking into my back
However if I was making a bag intended for a pack frame I would probably go for a slightly lighter canvas, because the stiffness would be less needed so you could get away with reducing the weight a little

And I second what Elleth says about a drawstring channel, I to have made that mistake

British WWII webbing was made from hemp canvas.
I have the '44 pattern pack that my Dad bought surplus during his Royal Navy service, so that would of been after '53.
He used it as luggage and later for tools, we also used it as a tool bag for most of my youth.... So it had a hard life for forty odd years and apart from the darned hole (from a burn I made) its probably good for another couple of decades at least.

Sullu iglukhul ya bark ra targ. (All is well with axe and beard.)

I started this thinking it would be easier than it turned out to be. First I started with an oak log. That was way to hard to be a first time carving project. Second I underestimated how hard precision carving would be, nevertheless I have found ways to keep going. Here's the current progress...

I started on a rainy weekend, in the living room. I debarked the log, in hindsight I should have done this outside in the rain, oh well.

20221124_104119 by Megan Beyer, on Flickr
Next I used my draw shave to flatten two sides before splitting out to planks. This was way harder then anticipated, and ended with two boards of very different dimensions. As a bonus I ended up with loads of nice kindling for the woodstove.

20221124_125936 by Megan Beyer, on Flickr
Next I roughly split all the pieces and cleaned them up a bit with my knife and draw knife. Sawed them to length.

I then contemplated the decisions that lead me to this point and read through suggestions on this thread... I liked Elleth's suggestion of lashing the pack, and think it's a great way to tie fleeing the mountain to the origin of the frame, and the slight roughness of the construction. Also shows all the tools I used so far.

I lashed the pack together by drilling small holes in the uprights and cutting grooves in the cross braces.

Currently I need to saw the shelf support in half and figure out how to lash it onto the frame.
I am currently braiding support cords out of hemp cordage. And have the leather straps cut and ready to finish. I plan to add some round braid on the straps in mohair to add some cushion and decoration. The braid will be similar to these hobbles I made for my horse.

On the canvas...
Thanks for the link to hemp canvas. I had already purchased a medium linen ticking from Burnley and Trowbridge for the canvas section. It has since arrived, and I think it is heavy enough for this bag section. I purchased extra to make a few tool rolls and pouches.
I will look into using hemp canvas in future bags, and projects.

I will be switching the drawstring channel out and putting in eyelets. I can see the advantages and think they will do a better job.

The leather sling is on hold till the post finds my package or its lost long enough to have a replacement sent out.

And of course I have been going on side quest with Rosie. Next project is to make her a better saddle pad for going out. 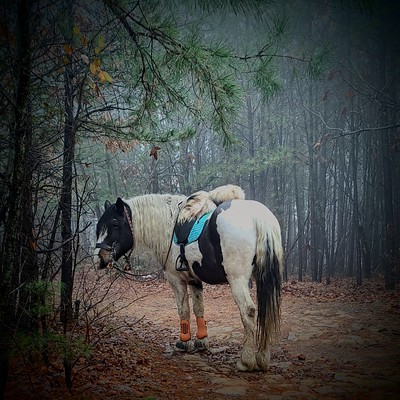 Gimli: It's true you don't see many Dwarf-women. And in fact, they are so alike in voice and appearance, that they are often mistaken for Dwarf-men.
Aragorn: It's the beards.
Top
Post Reply
12 posts • Page 1 of 1