Archery is a topic commonly discussed within Middle-earth weaponry, mostly due to the popularity of the Legolas character in the New Line Cinema films. The rangers were indeed skilled with the bow, but their bows are more commonly described as traditional English longbows, not the highly ornate recurves shown in film.

An esential ranger bow will have a few necessary qualities: it will be heavy enough in draw weight to hunt effectively, or perhaps pierce chain maille armor at a reasonable distance, but if possible, it will also be short enough from end to end as to not get in the way when stalking through the underbrush.

Arrows should be made of wood. Cedar and ash are known to be ideal shaft woods. Middle-earth authenticity has no place for carbon fiber or aluminum shafts.

Traditional arrows in medieval Europe were fletched with goose feathers, but turkey feathers are readily available in the United States, so many will use those or dye them to look like goose feathers.

Quivers are a large-scale topic. Quivers in medieval Europe were essentially bags that held arrows and were stuffed into a belt or hung off the belt across the back. True over-the-shoulder back quivers that modern fantasy is full of are mostly of native American origin and use, but Tolkien enthusiasts find themselves drawn to them readily. Legolas's quiver is described as riding on his back, so there is where we get our permission.

Carefully thought-out back quivers can become a central piece of gear when straps and pouches are integrated to form a small backpack of sorts. This, when complemented by a snapsack, haversack, bedroll on a tumpline, or a combination of these and various small pouches on belts and straps, can be all that you need to carry your gear. 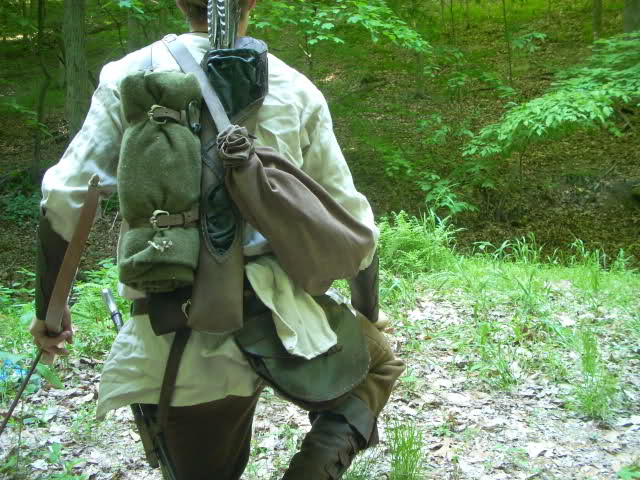