A ranger's clothes are generally rugged, serviceable clothes that are ideal for quiet movement and blending into the local background.

Generally this includes boots, a tunic, perhaps a coat, and a cloak.

For us, we consider clothing to be different from costume, which is something that one wears in a play, a fan convention, or Hallowe'en, and is not expected to be practical, or constructed of pre-industrial materials.

On the other hand, a ranger's clothing should be practical: durable for wear in the wilderness, capable of providing warmth in the long watches of the night and ideally made from materials and designs from pre-industrial times. We also want to choose muted colors found in nature, for these provide the best opportunities for concealment in the wild places.

As you begin to put together your ranger clothing and kit, you have at least three resources to guide your choices.

A tunic is a long, collarless shirt, made from woven fabric. There are many patterns of tunics available. Here are a few we've tried.

The Tunic of Saint Louis

The so-called “Tunic of St. Louis” is a linen tunic housed in the treasury of Notre Dame Cathedral in Paris. It is said to have belonged to Louis IX (St. Louis), who was King of France from 1226 until 1270 when he died on crusade in Algeria. Louis was canonized in 1297 and his tunic became a relic in the possession of the cathedral. The tunic therefore dates to the 13th century and the style does indeed fit with that assumption.

The Tunic of Saint Louis 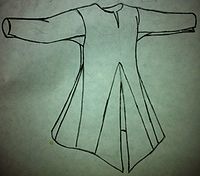 This is a good basic tunic that was used throughout Europe from 1000-1500. With simple modifications it can be made to have split skirts, or an angled bottom (like the leather jerkins of the Rangers of Ithilin in the Two Towers movie).

There are three examples of this type of tunic or "cote": the Kragelund cote, the Skjoldehamn cote, the Bocksten cote.

A shorter shirt with tapered sleeves becan popular in western Europe in the 1400's, a good style this appears to be close to what Aragorn wore in the Peter Jackson movies.

A shirt with gathered sleeves became popular in the 1500's and continued into the 1800's. While not currently in fashion, it has been used for Middle Earth interpretations in the past. It's been found that voluminous sleeves can interfere with a ranger's archery, so it can be impractical in that regard.

A travel-stained cloak of heavy dark-green cloth was drawn close about him, and in spite of the heat of the room he wore a hood that overshadowed his face...

-Lord of the Rings: The Fellowship of the Ring. Chapter 9: At the sign of the Prancing Pony

Cloaks are a widely used and referenced piece of kit in both Tolkien's Middle Earth and historical Europe. There is a wide variety of styles that range from Roman history through the high medieval period and beyond to the fantasy realm, but all serve the same basic purpose: you're wearing a blanket. For this reason, they can be very utilitarian, but many are considered fashionable/stylish for their look. A basic cloak can be one of the easiest garments you'll ever make, or it could be a complex, highly historically accurate fabric-saving garment made of pieced-together shapes cut from a blanket or heavy woolen blanket-like material.

A cloak can be adjusted in different ways to provide warmth and protection from the weather, depending on changing conditions. It can also be rolled up and carried over the shoulder, as we sometimes see Strider doing in Peter Jackson's movies.

In Jackson's film trilogy, The Lord of the Rings, Strider/Aragorn wears a duster, or long jacket. This is not a clothing item that appears specifically in the books, however.

His legs were stretched out before him, showing high boots of supple leather that fitted him well, but had seen much wear and were now caked with mud.

-Lord of the Rings: The Fellowship of the Ring. Chapter 9: At the sign of the Prancing Pony

The acquisition of a pair of these iconic high boots sometimes presents the most difficult challenge of assembling ranger's clothing. Here are some of the options that have been explored: