Setting Camp can be divided into a few sections, detailed below. Tolkien did not ever go into substantial detail when describing the campsites used by any of his varying companies unless they included dramatic natural features, such as the Window to the West, outpost of the Ithilien Rangers, which consisted of a drained underground river protected by a waterfall. Such natural features are hard to come by, but you can sleep just as comfortably if you keep a few key things in mind.

Selecting a site will make the difference between you having a comfortable night in the woods, and being miserable. Ideally, you want three main features in your site.

Sheltering yourself from the wind is a big deal. Wind can take a chilly night and make it a freezing one.

If you sleep in a shallow depression, all it will take is five minutes of light rain for you to be sleeping in a mud puddle, and unable to dry yourself off. Always seek out gently sloping ground that isn't likely to collect water.

Most people gravitate towards finding overhead shelter first. "Ooo, a cave!" is a very common one. I label overhead shelter the least important, because an overhead can ALWAYS be constructed, but well-draining ground and shelter from the wind are not always present. Caves, as an example, are almost always a constant source of cold, underground air. 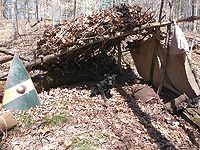 Natural shelters can be made from just about anything you find. Most commonly, a few long branches are lashed or propped up together to form a framework, smaller branches are laid over this to fill in gaps, and then the whole thing is covered in leaves, pine needles, pine boughs, bark, or whatever other material is at hand.

The trick is to put as little work into it as possible to conserve your energy. Using a fallen log that's propped up in a way that is just begging for you to sleep under it can save you the trouble of tracking down your initial support beams, etc.

If you have plenty of time before sundown and don't expect bad weather, shelters can become far more elaborate. You can always expand a natural shelter with a tarp, as well.

Tarp shelters are quicker to assemble, come in a myriad of shapes and sizes, and are often far less prone to leaks than a natural shelter. The main trade-off is carrying the weight of a tarp, but many find this negligible. 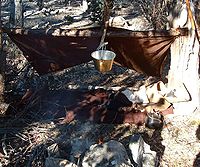 A classic lean-to with a tarp.

This is, by far, the easiest tarp setup to put together, and could be argued as the most versatile, but it does require some trees growing in just the right place, as do many other tarp setups.

The tarp is suspended from the top two corners between two trees, and then the bottom two corners are pulled (typically uphill) back and staked to the ground or weighted with rocks. This provides an overhead shelter, but if positioned the right way, it can also serve as an effective windbreak. 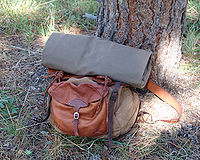 Anyone who has camped will tell you that you must separate yourself from the ground in some way. Modern campers use foam or inflatable ground pads, but these luxuries did not exist in Middle Earth. The best material to pile under yourself that I've found to date is fallen pine needles, but leaves, pine boughs, bracken, and grasses can all do the job well. 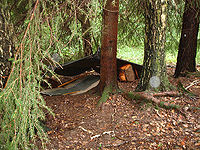 Unfortunately, the outdoor world is not perfect, so often you will find yourself in the woods with an endless supply of pine needles,.but they're wet. Sleeping on wet bedding is as dangerous (if not more so) than sleeping on bare, cold ground. The heat will be sucked right out of you. So the best way to remedy this is to bring a heavy-duty "you-sized" tarp that is waterproofed to lay down on top of your piled bedding. This would most commonly be a heavy cotton or linen canvas, soaked in a blend of linseed oils, to make a waterproof, slightly tacky material called Oilcloth. 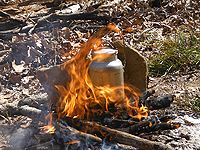 A small but effective rock reflector.

Lastly, the placement of your fire can have a significant impact on how comfortably you sleep. Just having a fire near you will not necessarily keep you warm. Since heat rises, it most often will simply float away, unused. This can be remedied by constructing a small reflector out of rocks, to direct the heat into your shelter. Select flat-faced rocks that can be made into a small wall. Finding dry rocks is important; rocks are porous, and if they've been in a stream, they may have absorbed water, which will steam and potentially cause the rock to explode violently when placed in a fire.