My persona for living-hobbitry purposes is that of an individual named Tungo Boffin, a young Bounder based in Buckland living at the time of the War of the Ring. Unlike some of Tolkien’s other Middle-earth cultures, the society of the Shire is fully fleshed out, and so this persona is likewise meticulous in the details. (Tungo is a simple, punning name, coming from a Stoorish word originally meaning ‘big’. Authentically, he would have been called Tunga Bofan) 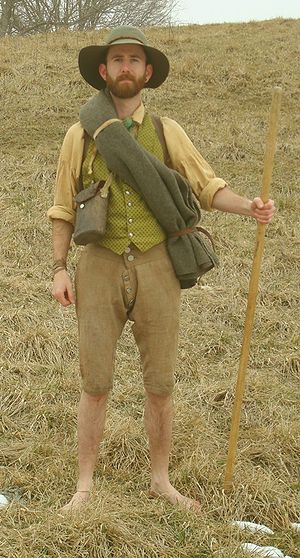 One of the ‘various descendants’ of Rollo Boffin and Druda Burrows , Tungo was born in SR 1376 (Third Age 2976) in the Eastfarthing. While a ‘Harfootish’ Boffin in name, Tungo’s mother (a Brandybuck) and paternal grandmother (a Puddifoot) both added a significant amount of Stoor and Fallohide blood to his pedigree. Additionally, Tungo’s father died while Tungo was young, causing he and his mother to move back with her kin in Buckland – which means Tungo was raised among ‘those queer Bucklanders’, and so is unafraid of boats, can swim, and has a taste for adventure!